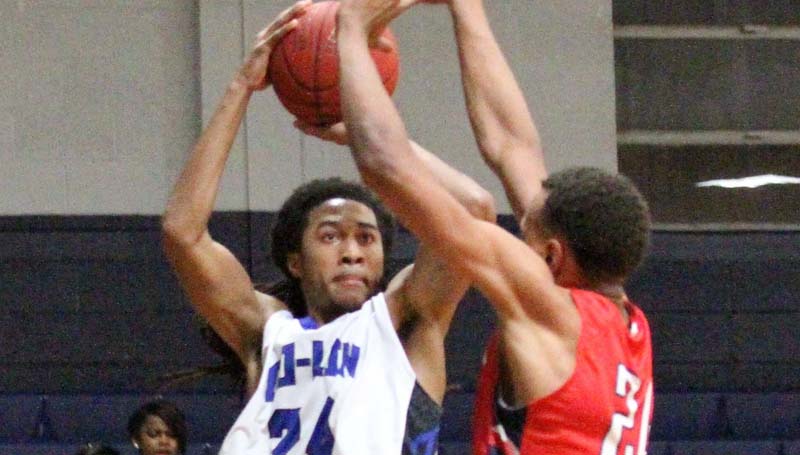 WESSON – Costly turnovers and missed opportunities cost the Co-Lin Wolves as they fell to the Southwest Tennessee Community College Saluqis 75-67 in their final game of the semester Monday night.

The Wolves return to action Jan. 8 at 6 p.m. when they travel to Memphis to take on the Saluqis for game two of the home and home series.

The Wolves (2-8) committed 26 turnovers in the game – the majority caused by the smothering Southwest Tennessee full court press.

Southwest Tennessee went on a 23-8 run in the first half and took a 37-30 lead into the locker room at halftime.

Early in the second half, the Wolves would go on an 8-2 run to pull to 39-38. But the Saluqis put together a 14-3 run of their own with 15:31 left in the game. But the Wolves would again rally as Donte’ Watson’s 3-pointer with 3:53 remaining would pull Co-Lin to 62-60. But Southwest Tennessee would hold of the Wolves rally.

“We had too many turnovers that led to points for them and you can’t do that against this team,” said Co-Lin head coach Kenny Bizot. “We missed some opportunities where we didn’t do a very good job handling their pressure. I love watching these guys elevate their games and their commitment that one of the things I love about coaching. We have to get better. I’m looking forward to good things for us after the break.

Watson would continue his hot shooting as he led the Wolves with a game-high 26 points and eight rebounds. The only other Wolf in double figures was Darius Kennedy with 19 and five assists.

Ronald Whitaker came off the bench to score 12 points to lead the Saluqis. Kennedy McKinney and Jimario Rivers had 10 points apiece. David Burrell had six rebounds.