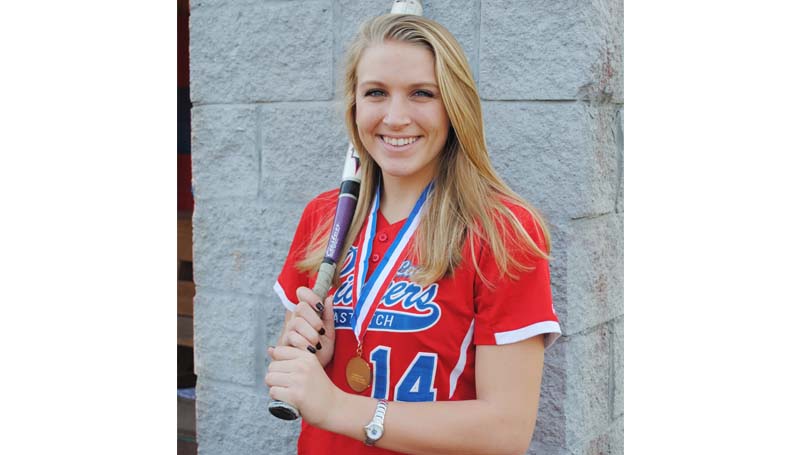 Daily Leader / Marty Albright / Parklane Academy softball senior Taylor Murray is all smiles as she poses for a photo with her state championship medallion.

She helped her Lady Pioneers win the Class AAAA State championship and the MAIS Overall championship.

“This year has been very successful and it was filled with many achievements,” said Murray. “I have made plenty of memories with many friends that will last a lifetime. Winning the state championship was by far the best memory. I have been blessed with the opportunity to play for Parklane and will be forever thankful.”

On the season, Murray posted a .414 batting average with seven home runs, 25 singles, 10 doubles and four triples. Her on-base percentage was .470 and her slugging percentage was .766. in 37 games played.

In the postseason, she had a .633 batting average with 16 RBIs, four double, one triple and one home run.

Murray said she will commit to Jones County Community College to play softball for the Lady Bobcats this January. She plans to pursue a career in architectural design.

“Taylor is one of the most gifted players that I have ever coached,” said Parklane Academy softball coach Steve Sasser. “Coaches do not get many opportunities to watch a player like her on a daily basis. I have seen her do things that I have never seen any other softball player do.

“She is very coachable and wants to be the best player she can be,” said Sasser. “Taylor is successful because of her work ethic and the character she possesses. We are so proud of her and look forward to watching her on the next level.”

Murray is the daughter of Pat Murray and Jerry and Jackie Ivey.