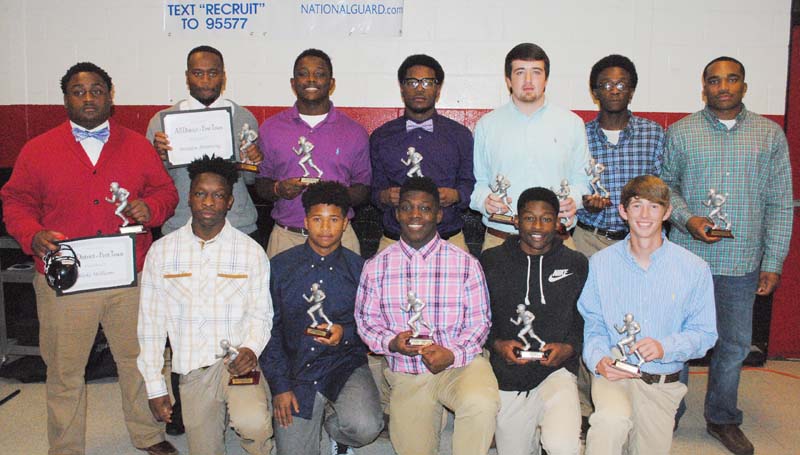 Head football coach Jaymie Palmer thanked his assistant coaches, coaches’ wives and several others for their hard work and contributions to the team to this season.

“Everyone did a great job and played a huge part in our team success on and off the field this season. I just want to say thank you and I appreciate everything that everyone has done to help this season be a success,” he said.

Lawrence County finished 13-2 on the season, with a 5-0 record in the Region 7-4A race. The Cougars won the division championship and finished runners-up in the Class 4A South State championship.

Palmer and his assistant coaches handed out special awards that were voted on by the players. Each player received a participation certificate.

Several players were also recognized for their achievements in the classroom. John Rutland was the overall winner of the Scholar award.

Kejuan Brown was honored with the Cougar award. Blake Williams won the Kenric Grandberry “Heart of a Champion” award. Kemarcus Brown earned the Most Improved award. Oliver Moreman captured the Rookie of the Year award. John Rutland and T-Tez Cole were recognized as the teams’ Permanent Captains.

Athletic Director Corey Keyes opened the ceremony welcoming the crowd to the event that honored the athletes. Keyes gave the invocation. During the meal, everyone enjoyed a highlight film of the Cougars’ football season.

After the meal, LCHS Cheerleader coach Roshanda Alexander began the award ceremony and recognized her cheerleading squad. Even though Alexander did not hand out any special awards, she praised her girls for their efforts in having a great season. Several members of the cheerleading squad received medallions for a job well done in their summer cheer camp.

Rookie of the Year: Oliver Moreman