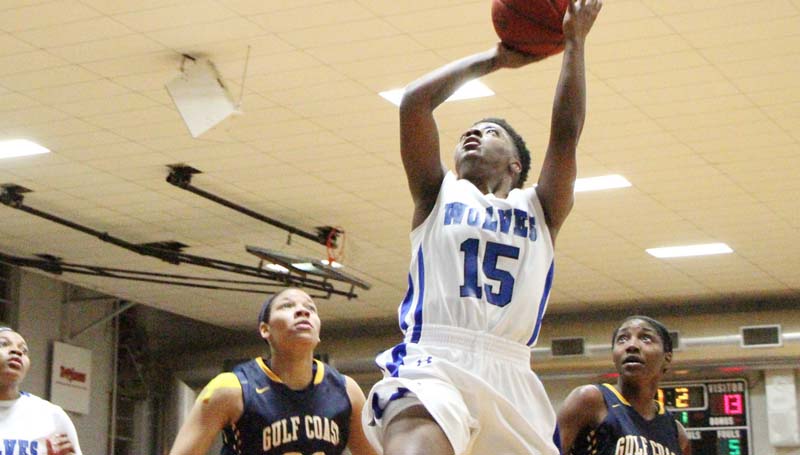 WESSON – Sophomores Kelley Allen and Tytiana Hall scored 17 and 15 points respectively to lead the Co-Lin Lady Wolves to a 73-48 South Division win over the Mississippi Gulf Coast Lady Bulldogs. The Lady Wolves (14-2, 5-2) seem to have found their stride after two mid season losses.

Co-Lin travels to Hinds Community College in Utica on Thursday. Tip off is set for 5:30 p.m.

Co-Lin dominated the game from the start jumping out to a 6-0 lead. The score continued to pile up with Co-Lin winning by as much as 35 in the fourth quarter. The offensive was clicking the entire night, and the defense forced 11 steals. Overall, 11 different Lady Wolves scored to contribute to the win.

“We started out scoring, and preventing them from scoring,” said head coach Gwyn Young. “This allowed us to sub more freely throughout the game. We’ve been working a lot on passing the ball on the inside, and I think we did a lot better job of that tonight.”

In addition to Allen and Hall, Andreal Fleming came off the bench to chip in 11 points and six boards. Allen led off the boards with a team-high eight rebounds. Jamilah Sanders returned to action after being sidelined with a knee injury to add eight points and dish out a team-high seven assists.