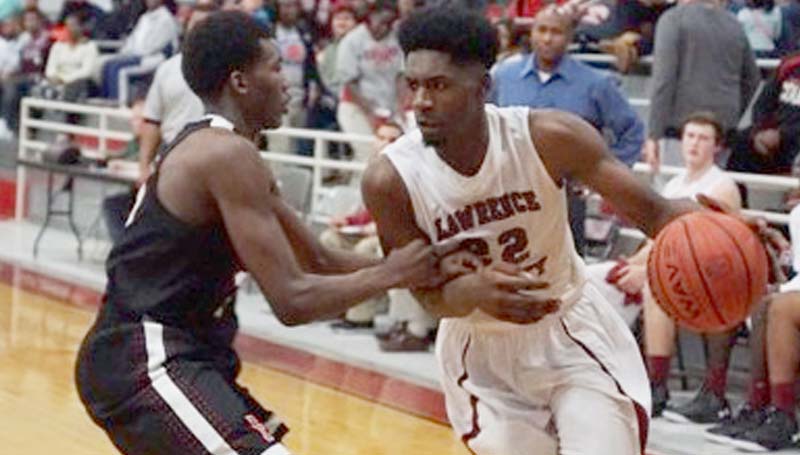 In the girls’ game, highly-ranked Florence got the better of Lawrence County in the second half for the second time this season. Seventeen days earlier, Vicki Rutland’s girls led Florence 20-17 at halftime, only to be outscored 38-8 in the second half. Friday’s game was similar. It was knotted at 16-16 until Florence scored the final 5 points of the first half to lead 21-16.

The second half was again dominated by the Lady Eagles, who have at times held the No. 1 ranking in 4A girls basketball. Florence absolutely dominated on the boards, getting one second-chance basket after another. Four players accounted for 61 of the Lady Eagles’ 63 points. Danyelle Lewis led with 17. MiKayla Patton and Tiyunna Dixon each had 15, and Jayla Williams scored 14, along with 15 rebounds.

Florence improved to 18-2 overall, and 6-1 in Region 6-4A play. Both Florence teams are coached by former USM standout Darrin Chancellor.

Lawrence County got 18 points, six rebounds, and four steals from sophomore Camryn Davis. Zipporah Baylis had nine rebounds and three assists. The Lady Cougars fell to 12-10 overall, and 1-5 in the region.

In the first boys’ meeting between Lawrence County and Florence, two players accounted for much of the scoring and a good many highlights. Lawrence County center Keyshawn Feazell had 29 points in that meeting, and Florence freshman phenom Jaylan Forbes put up 43 points. On Friday, both teams were determined to stop the other team’s top scorer. It made for a rough, physical battle that stayed close until the end.

LCHS led 9-2 after one quarter, only to be outscored 14-2 in the second quarter. Florence led 16-11 at halftime. The second half was close throughout. The teams were tied at 28-28 with six minutes to go in the game. After that, the Cougars outscored Florence 16-7. Free-throw shooting helped the Cougars’ cause, as Lawrence County converted 13-of-18 free throw attempts in the decisive fourth quarter.

Forbes had 12 hard-earned points for Florence. The Eagles fell to 5-15 overall, and 2-5 in the region.