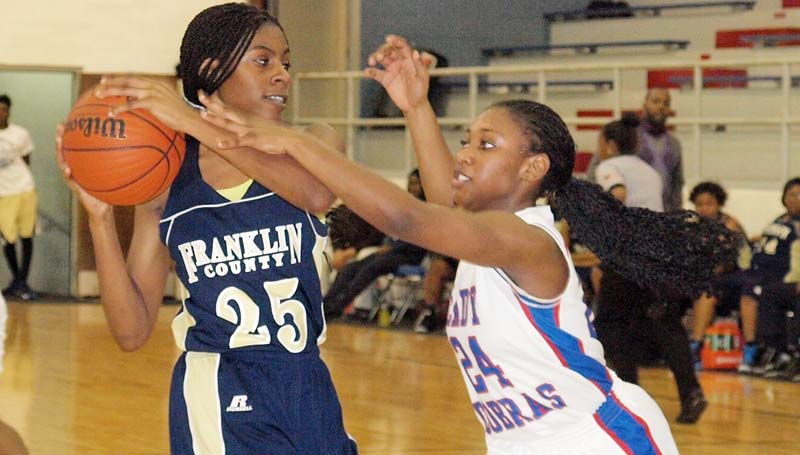 WESSON – Franklin County captured a pair of division wins over Wesson Friday in Region 7-3A action at the Snake Pit.

In the girls’ contest, the Lady Bulldogs defeated the Lady Cobras 42-27.

In boys’ action, the Bulldogs edged the Cobras 63-60

Wesson continues district action Tuesday as it travels to Port Gibson to battle the Port Gibson Blue Wave. The varsity girls tip off at 6 p.m., followed by the boys at 7:30 p.m.

Franklin County will also be in action Tuesday as it hosts the Hazlehurst Indians for a pair of region games. The Lady Bulldogs will start the action at 6 p.m., followed by the Bulldogs at 7:30.

“My girls played really well defensively,” said Franklin County coach Ricky O’Quinn. “We are a very young squad, but we are getting some great learning experience playing against some tough teams. Overall, I am proud of their effort and glad to get the win.”

Senior center Jashia Smith directed the Lady Cobras with 11 points, nine rebounds and two steals. Freshman Alaysha Mims provided six points, one rebound, one steal and one assist. Aurianna Vaughn and Carnesha Green finished with four points apiece. Vaughn collected three rebounds, one steal and one assist, while Green was the leader on the boards with 12 rebounds and had one steal.

“This was a tough lost,” said Wesson coach Rusty Newman. “We could not buy a shot throughout the whole game. We played really good defensively, but just could not do anything offensively.”

For the second night in a row, Wesson let a potential win slip through its fingers. Gerryon Bell’s shot gave the Bulldogs a 55-54 lead with 4:33 left in the fourth period, and the Bulldogs wrapped up the game on a 8-6 run to secure the victory.

“This was a great game for our guys,” said O’Quinn. “We are currently missing a few of our best players due to injuries, but our young, inexperienced players did a great job stepping up for us tonight. Even though we got into early foul trouble our guys continued to play hard and was able to make the plays at the end to get the win. I was very pleased with their effort.”

Bell was the top scorer for the Bulldogs with 18 points and five rebounds. Jalen Dogan contributed 17 points, three steals and had six rebounds. Tony Gibbs finished with 11 points, six rebounds and two steals.

“We are not playing very well right now,” said Newman. “We are currently playing in spurts and that is not good enough to win in our district. I hope we can get the kinks worked out before our tournament starts.”