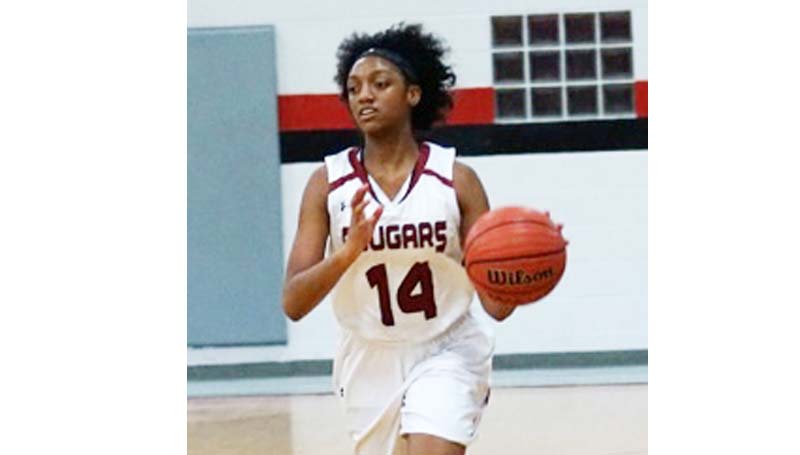 MONTICELLO – Lawrence County closed out its regular season by sweeping a Division 6-4A basketball double-header from North Pike.

In girls’ action, Lawrence County rallied in the second half to gain a 46-42 win over the Lady Jaguars. The boys’ game was never in doubt, with the Cougars roaring to an 84-33 victory over North Pike.

Pat Bridges’ Cougars sizzled from the start, connecting on eight first-half 3-pointers en route to a 40-17 halftime lead. The onslaught continued in the third quarter, as LCHS stretched its lead to 70-24.

Javion Jackson was a force for North Pike. The senior scored 18 of the Jaguars’ 33 points.

The Lawrence County boys improved to 19-8 overall, and finished Division 6-4A play with a record of 8-2, good for the No. 2 seed in next week’s division tournament at McComb. Keith Russ’ North Pike Jaguars fell to 7-12 overall, and 2-8 in division play.

The real action was in the girls’ game. Vicki Rutland’s Lady Cougars needed a win to avoid finishing sixth in the division, and having to play a powerful No. 3 seed in a tournament elimination game. Lawrence County’s season-long offensive woes continued in the first half, however, as North Pike built an 18-11 halftime lead.

Lawrence County, buoyed largely by sophomore forward Camryn Davis, rallied in the third quarter, knotting the game at 30-30. The Lady Cougars took a 40-36 lead on a Davis basket with 2:40 left, and stretched their lead to six on two Haven Johnson free throws with 1:04 left on the clock.

The win left Lawrence County tied with North Pike and Richland at 2-8 in the division standings. LCHS earned fourth place via a tie-breaker, and will face the fifth-seeded Lady Jaguars again on Tuesday, in the opening round of the Division 6-4A tournament.

Davis led the Lady Cougars with 19 points, and DeNeisha Dickson added 11. Lawrence County improved to 13-14 on the season.

North Pike, coached by Laura Holman, was led by Rachel Thompson, who scored 18 points. Sarah Brock scored 11 before fouling out. The Lady Jags fell to 9-14 on the campaign.