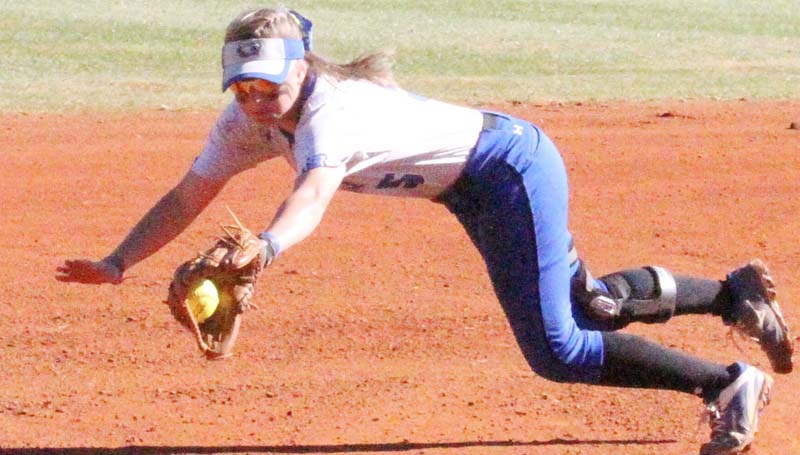 WESSON – The Co-Lin Lady Wolves racked up 15 hits to take a 12-2 over the Hinds Lady Eagles in five innings in first game of a doubleheader. Defensive errors plagued the Lady Wolves in game two as they dropped game two 5-4 in Wednesday’s JUCO softball action.

The Lady Wolves (6-2) return to action on Saturday as they will play Shelton State (AL) at 11 a.m. and East Mississippi at 3 p.m. in the Meridian Tournament.

The Lady Wolves took an early lead scoring six runs in the bottom half of the first inning. Kaitlyn Taylor brought in Kamryn Vanlandingham with a hard ground ball that got the scoring started. Dianna Hobgood drew a bases-loaded walk that gave the Lady Wolves the 2-0 lead. Brittany Barbay followed up with a line drive to center field that scored pinch runner Greta Carley to make the score 3-0. Mattie Avants battled back from a 0-2 count with the bases loaded to draw another walk that scored Hobgood. Vanlandingham’s 2-RBI single to center field plated Barbay and Kayla Britt to give Co-Lin the 6-0 lead.

Taylor hit a two-run home run in the second inning. Britt followed with an RBI single as the Lady Wolves took a commanding 9-0 lead.

Catcher Jessica Crum added a two-run home run in the third inning that extended the Lady Wolves lead to 11-1.

The final run for the Lady Wolves came in the fourth as Lauren Brashier ripped an RBI single that plated Katie Grace Culpepper.

“Offensively, we hit it like we are capable of doing,” said Co-Lin head coach Allen Kent. “We pounded out 16 hits in just four offensive innings.”

Kaitlyn Taylor earned the win for the Lady Wolves allowing one run (unearned), no hits, one walk, and three strikeouts in 3.2 innings. Brashier threw the final 1.1 innings allowing one earned run on four hits.

At the plate, Crum had a home run, double and a single (2 RBIs). Barbay had three singles (1 RBI). Vanlandingham (2 RBIs) and Britt (1 RBI) added a pair of singles apiece. Taylor had a home run (3 RBIs). Brashier, Culpepper, and Jamie Martin doubled. Hobgood added support with a single.

Amberlee Nix suffered the loss for Hinds giving up six earned runs on four hits and walked four batters in one inning of work. Kathryn Inman also saw action in the circle allowing six earned runs on 11 hits, striking out one and walking one.

Offensively the Lady Eagles were lead by Tory Laird and Bree Glenn who both had RBI singles.

In the fourth, the Lady Eagles extended their lead to 5-1 after a series of singles. The Lady Wolves plated a run in the bottom half of the inning as Scott scored on an error pulling Co-Lin to 5-2.

“We just appeared to come out flat,” said Kent. “We dug ourselves in a hole early, and were not disciplined at the plate. We left 11 runners stranded, and this is something must improve on before division play starts”.

Starter Trevlynn Scott absorbed the loss for Co-Lin allowing four earned runs on seven hits, walking one, and striking out one in .1 innings. Kamry Creel threw 1.2 innings giving up two hits and striking out one. Taylor came in to finish up the game throwing two hitless innings.

Faith Thomas earned the win for the Lady Eagles allowing one earned run on six hits and striking out one in four innings. Meagan Duchene tossed the final three innings giving up one earned run, scattering five hits, striking out two and walking one.