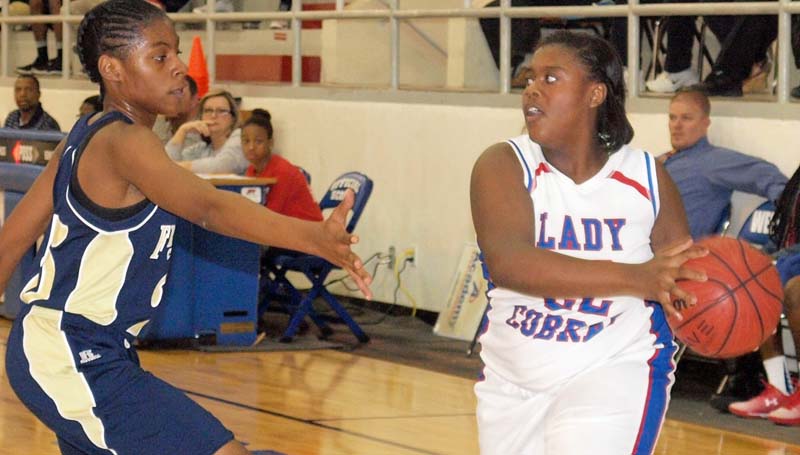 WESSON – The Wesson Cobras and Lady Cobras survived the elimination round of the Region 7-3A tournament Wednesday night.

In the girls’ contest, Wesson’s Alaysha Mims scored the game-winning shot with eight seconds left to lift her Lady Cobras over Franklin County 37-36.

In boys’ action, the Cobras clobbered the Port Gibson Blue Wave 76-57 to advance.

In other tournament action, the Wilkinson County Wildcats eliminated the Franklin County Bulldogs 52-50. The Lady Wildcats ended the Hazlehurst Lady Indians’ season with a 54-38 victory.

After Mims’ shot gave Wesson the lead, the Lady Bulldogs rushed down the court to take the final shot, but the ball rattled out of the rim and Wesson’s Jashia Smith grabbed the rebound to secure the win.

“The girls played well and showed a lot of heart tonight,” said Wesson coach Rusty Newman. “We battled back from 12 down and found a way to get the win. I’m proud of the girls and hope they continue to play well to advance further in the tournament.”

Sierra Bethley was the top scorer for the Lady Bulldogs with 12 points. Jasmine Treadway chipped in 11 points.

The Cobras came out determined to snap a four-game losing streak. Wesson overpowered Port Gibson throughout the contest and will advance to the semifinals.

“This was a good team and we played really well on both ends of the floor,” said Newman. “We managed to get a lot of the guys involved which helped out a lot. I’m proud of the guys and hope they continue this momentum to play well.”

Javonte Frye directed the Blue Wave with 19 points, three rebounds and one steal. Wartuez Williams was the leader on the boards with seven rebounds.

The Wilkinson County Wildcats survived a tough battle against the Franklin County Bulldogs to clinch the win.

Travion Jones was the top shooter for the Wildcats with 16 points, 13 rebounds and three steals. Desmond Hunter contributed 11 points and had two rebounds.

The Bulldogs were led by Toney Gibbs with 16 points, five rebounds and one steal. Cameron Young and Jalen Dogan chipped in seven points apiece. Dalavin Hunt and Gerryson Hunt finished with six points each. Young was top defender with 10 rebounds, two blocked shots and one steal.

Kanerria Reese paced the Lady Indians with 17 points, two rebounds and two steals. Allyson Banks and Micah Reed were the leaders on the boards with six rebounds each. Banks scored eight points and Reed had four points.