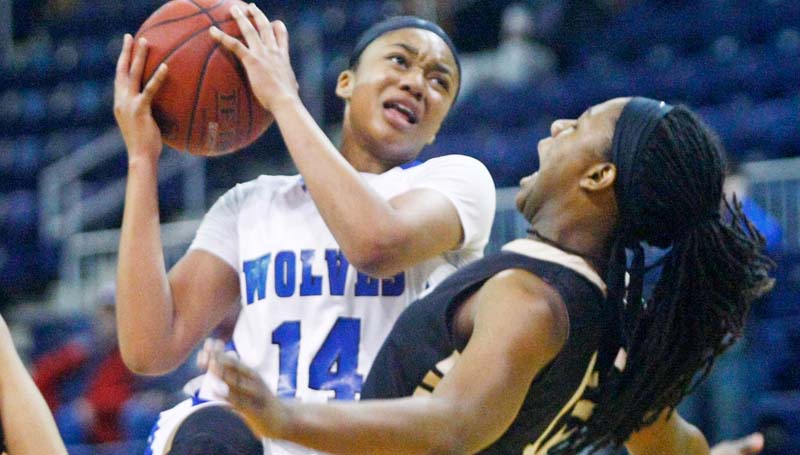 The Lady Wolves will be back in action in the NJCAA Region 23 Tournament that begins on Wednesday, March 2, at A.E. Wood Coliseum on the campus of Mississippi College in Clinton, Mississippi. Seeding for the tournament will be available after the finals of the state tournament. Listen to the action live at www.colinathletics.com or WMJU 104.3 FM in Brookhaven.

The game seemed to go in Co-Lin’s favor from the very beginning as the Lady Wolves jumped to the lead with a quick three-pointer from Alexis Collins. The Lady Wolves played very physical and netted 22 points in the first quarter alone and ended the period with a 22-18 lead.

The defense for the Lady Wolves stepped up in the second quarter as the Lady Warriors were held to only 11 points. Co-Lin’s offense continued to find the rim as the team poured in another 16 points to extend to a 38-29 lead entering the locker room.

East Central roaring back in the third quarter and begin finding the basket more often. Led by Samantha Duncan, the Lady Warriors whittled the Lady Wolves lead down to just one with just over five minutes remaining in the contest.

Sophomore forward Kelley Allen, a cornerstone of the Lady Wolf offensive, fouled out with just two and half minutes remaining in the contest. With a little over one minute to play, the Lady Warriors gained their first lead and only lead of the ball game from a huge three-pointer from Duncan. Co-Lin was unable to overcome the impressive second half performance from East Central. The Lady Warriors shot 58 percent in the second half of play.

“We had a chance, and we blew it in the end,” said Lady Wolves head coach Gwyn Young. “They put a lot of pressure on you defensively and we just didn’t handle it like we needed to.”

Alexia McDonald and Duncan led the Lady Warriors with 19 points each. McDonald added seven rebounds while Duncan added eight. Mircale Rushing finished with a double-double after netting 11 points and bringing down 11 rebounds. Johnta Hughes added another 10 points for the Lady Warriors.