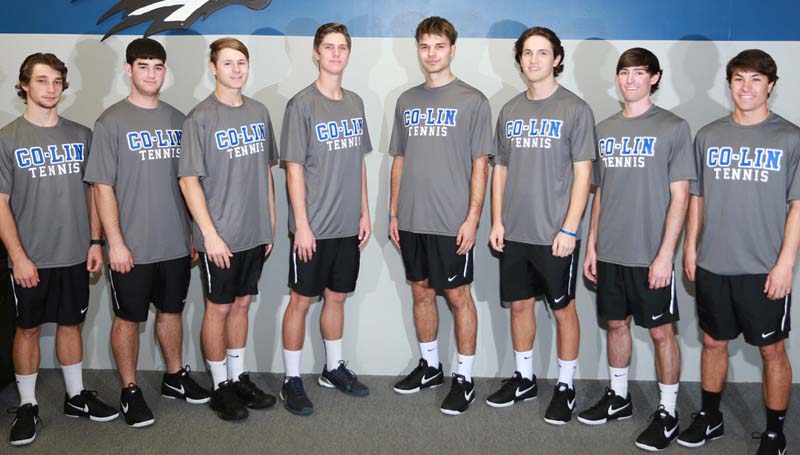 WESSON – At the helm of the Co-Lin Wolfpack men’s tennis program for her third season, head coach Brenda Smith is excited and optimistic for this upcoming season. With a combined career record of 122-30 between the men’s and women’s programs, Smith is no stranger to coaching talented players. The 2015 team finished with 7-4 record that Smith thinks can be improved on. With three sophomores returning and a brilliant group of freshman joining the netters, hopes are high in 2016.

Braxton Hinton is back to help lead the Wolfpack in 2016. The sophomore, with a strong serve, is extremely competitive, and hits a strong forehand. In 2015, Hinton played at the No. 3 singles spot where his energy on the court proved infectious. The Brookhaven High School product paired with Drake Nelson to compete in doubles.

Lawrence County’s Drake Nelson compliments the play style of his 2015 partner, Hinton. Nelson, a player that will return almost any shot taken at him, returns to the program for his sophomore season. He is a driven competitor, a multi-sport athlete, and a great hustler on the court. Smith expects Nelson to continue his trend of tremendous effort and hopes he can lead the incoming freshman to do the same.

Will Pennington, a North Pike High School product, brings his experience back to the team. He spent 2015 as the No. 2 singles player and on the No. 1 doubles team where he won rounds at the state tournament in both draws. Will is a very technical player and has the ability to hit any ball that comes his direction. With a great stroke and smart playing, Pennington looks to continue to improve and make another run in the MACJC State Tournament.

Five freshman bring depth and talent to the roster

With five skilled freshmen joining the Wolfpack in 2016 there is little talent drop-off from the No. 2 slot to the No. 6. Matteusz Kimelski, from Piotrkow, Poland, is a freshman in 2016 who looks to play in the No. 1 position. He is a fantastic ball striker that will be able to compete at a high level. Skyler Moody, of Lake Charles, Louisiana, also starts his freshman season this year. Moody is a skilled player who attained a lot of experience playing junior tennis and playing in the always tough 5A Louisiana high school division. Also joining the squad is Cory Alderman, of Brookhaven, Cole Moak, of Loyd Star High School, and Hayes Thompson, of North Pike High School. These players all provide depth to the team, and make Coach Smith’s lineup decision even more difficult.