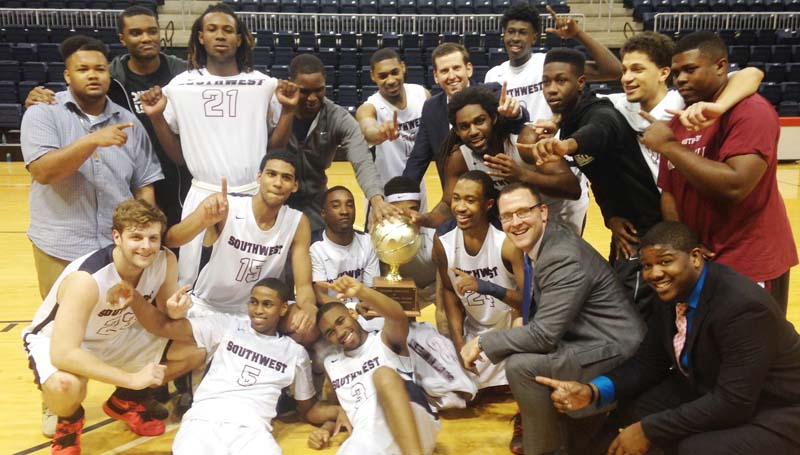 FULTON – A 53-year drought ended Thursday night in Fulton when the Southwest Bears picked up their third MACJC men’s basketball state championship with a thrilling 94-83 overtime win over the Jones County Bobcats. This was the Bears’ first state title since the 1962-63 team won it all under the direction of the late Horace Holmes.

A Lafayette Rutledge three pointer had the Bears on top 4-2 with 17:35 left in the opening half. The Bobcats then scored seven straight and took a 9-4 lead on Rickey Holden’s layup with 13:43 before the break.

With the Bears trailing 14-9, an Emanuel Thompson three pointer and two point field goal tied it at 14-14 with 8:50 left in the half. But, the Bobcats scored six straight to take their biggest lead of the half, 20-14, with 7:21 on the clock.

Scoring five of the next seven points, including a Bryce Baker three pointer, the Bears tied the game again, 21-21, with 4:38 left in the half. After the Bobcats went up 30-26, six straight points by Rodrick Sikes resulted in a 32-30 Bears’ lead with 1:32 on the clock.

Three pointers from Sikes and Guy Johnson then served as bookends as the Bears went on a 9-2 “mini-run” to push their lead to 10 points, 53-43,with 13:41 remaining.

Sikes nailed a pair of free throws to give the Bears a 75-71 advantage with 1:50 on the clock, but back-to-back baskets from Holden and Bruce Stevens knotted the game at 75-75 with 0:58 left.

The Bears had two shots at victory in the last 0:29 of regulation, but both missed the mark to force the extra period.

After Stevens’ layup cut the Bears’ lead to 81-78, they scored seven straight and took an 88-78 lead on a pair of Sikes free throws with 1:09 showing.

After Andre Johnson hit a jumper for the Bobcats to make the score 88-80, with 0:59 to play, Johnson and Sikes combined to hit three of four free throws for the Bears to extend their lead to 91-80 with 0:36 left.

Zebedee Rice hit a three pointer to trim the Bears’ lead to 91-83 with 0:25 to go, but the Bobcats would come no closer as the Bears hit three free throws down the stretch to secure the title.

“First and foremost,” said Bears’ head coach Thomas Gray post-game, “to God be the glory. He has blessed us beyond anything we deserve.”

“What else can I say about tonight?,” a jubilant Gray asked. “This was an unbelievable experience that as a coach I was extremely blessed to be a part of. I could not be happier for a group of guys as I am this group. I told our team at various points during the last month or so that we may not be the most talented group in the state, but I really believe we are the best team in terms of being for one another and genuinely loving each other.”

“It’s amazing how different guys have stepped up at different times throughout the games,” Gray continued, “and I think that kind of balance and awareness are what makes teams great.”

Giving credit to his assistant coaches, Gray said, “I am privileged to work alongside two of the best coaches you can find in Andy Farrell and Mike DuBose; those two guys are who make everything come together.”

Concluding his celebratory remarks, Gray said, “I am so thankful for all of our students, the administration, fans and families who made (the) long drive to Fulton tonight. This will be something that we will all remember for a long, long time.”

Sikes was six of nine from the field and 17-22 from the free throw line in picking up a game-high 31 points for the Bears. Baker and Hawthorne both scored 13 while Johnson and Rutledge both tallied 10 points. The Bears made 31 of 44 free throws.

Stevens led the Bobcats with 19 points. He and his teammates combined to make 25 of 33 free throws.