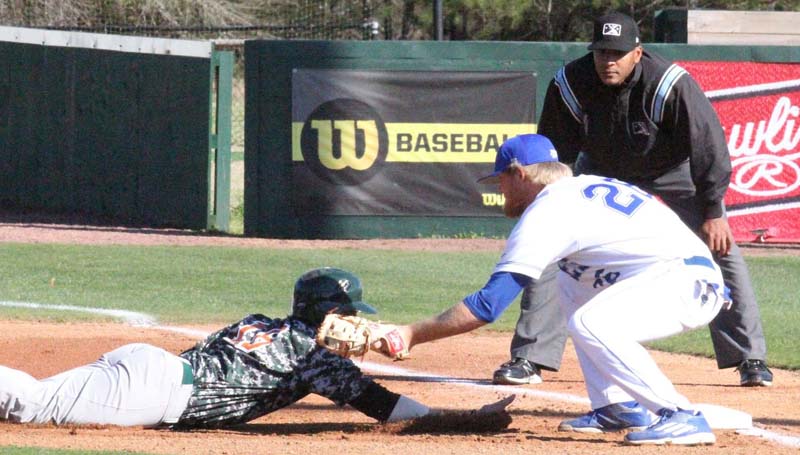 WESSON – The bats were busy at Sullivan Field on Friday, after 34 total runs were scored by Co-Lin and Lincoln Trail College (IL) in the doubleheader. Co-Lin edged out the Statesmen in game one 10-9 thanks to a productive second inning. The Wolves fell 9-6 in the nightcap.

The Wolves are back in action Tuesday as Southwest visits Wesson for game one of the Coca-Cola/Powerade Challenge. First pitch is scheduled for 5 p.m. Watch live at www.colinathletics.com or listen on WMJU 104.3 in Brookhaven.

An eight run second inning gave the Wolves an early lead in game one of the doubleheader. Kody Smith started the rally with a single to right that scored pinch runner Matthew Mordecai. Kewaun May followed with a single that brought Smith across the plate. Austin Irby kept the rhythm with a single of his own that scored May. Irby crossed the plate two batters later after an error. Reed Taylor kept the hot inning alive with a double to left that scored Champ Davison and Jeremy Moore. Mordecai scored the final run of the inning for the Wolves off a single from Jordan Antley.

The Wolves last two runs of the game came in the bottom of the third after Davison belted a double to left that scored Justin Oliver and May. The Statesmen battled back throughout the game narrowing the lead to one. The Wolves defense stepped up in the final two innings of play, recording six consecutive outs to finish the game.

Austin Odom earned the win for the Wolves in 4.2 innings of work giving up eight hits, seven runs (no earned), two strikeouts, and three walks. Tanner Jones threw 0.2 innings allowing up two runs (no earned) on one hit, one strikeout and one walk with a strikeout. Cole Langdon threw 1.2 innings and gave up just one hit and striking out one.

Game two started with hot bats with after Lincoln Trail scored two runs in the top of the first inning. Co-Lin answered in the bottom half of the inning after Moore singled to left and scored Irby. Taylor followed suit with a single that scored Davison. Tyler McLeod ripped a single to center that scored Taylor that wrapped up the productive inning for the Wolves.

The Wolves scored again in the second after Moore doubled to center driving in Davison. J.T. Wright singled to left scoring Taylor.

Co-Lin’s final score was May, after he came across the plate on an error.

Moore had a single and a double (two RBIs) for the Wolves. Irby, Oliver, Taylor, Davison, McLeod, Wright, Smith, and Jacksn Twitty added support with a single apiece.

Jack Holden led the Statesmen with three hits and one double. Hernandez added two hits and a home run.

Austin Douglas suffered the loss for the Wolves giving up three runs (one earned), two hits, and one walk in two innings of work. Jordan Antley threw four innings and allowing five runs (two earned) on five hits, struck out four, and walked five. Ryan Cullop threw one inning and gave up one run (earned) and two hits.

Jay Prior earned the win for the Statesmen after three innings pitched. Prior gave up one run (unearned), two hits, and one walk. He struck out four. Zack Denney threw four innings and gave up five runs (all earned), eight hits, and two walks. He struck out one.