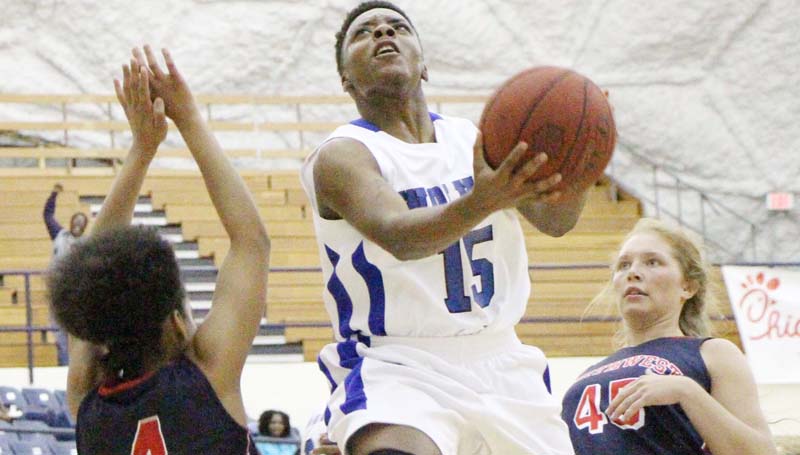 CLINTON – The Co-Lin Lady Wolves secured a spot in Friday’s semifinals of the NJCAA Region 23 Tournament with an 86-75 victory over the Northwest Lady Rangers Wednesday night.

The Lady Wolves (22-4) will take on the Holmes Lady Bulldogs, a 77-75 upset winner over the MACJC State Champion East Central Lady Warriors. Tip off for Friday’s game is set for 12 p.m. at A.E. Wood Coliseum on the campus of Mississippi College. Listen to the action live at www.colinathetics.com or WMUJ 104.3 in Brookhaven.

Co-Lin’s offense, defense and rebounding were all in sync. The Lady Wolves never trailed in the contest as the team quickly jumped out to a 21-15 first quarter lead. The Lady Rangers fought back and brought the 13-point second quarter lead down to just one late in the half. But the Lady Wolves would take a 43-37 lead into the locker room at halftime.

Co-Lin led by as many as 16 points in the third quarter.

But just when the game seemed to stretch out of reach for Northwest, the Lady Rangers went on an 11-0 run, cutting the Lady Wolves’ lead to three. Clutch free-throw shooting late in the game clinched the game for the Lady Wolves; the team coasted in the final minute of play to the victory.

“I was hoping we would do better defensively, but thankfully our offensive was scoring for us,” said Co-Lin head coach Gwyn Young. “We made some great plays, especially there at the end of the game. We shot the three well and just rebounded when we need to, and (Debraia) Bell did great for us off the bench.”

Brianna Williams led the Lady Rangers with 23 points. Sara Lytle poured in another 21 points and led the team with eight boards. Janesha Johnson and Kelsey Brown scored 12 each.