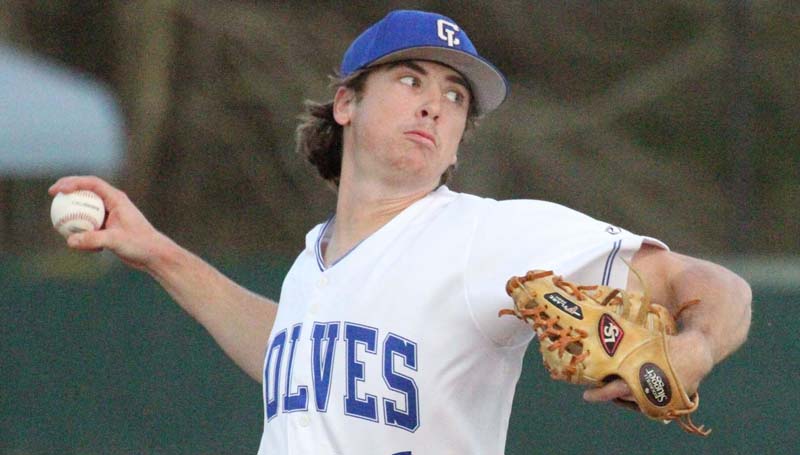 Co-Lin Media / Natalie Davis / Co-Lin starting pitcher Cole Langdon gets the win over Southwest in Game One of the Coca-Cola Classic/Powerade Challenge Wednesday.

WESSON – The Co-Lin Wolves posted a nine-run fourth inning on their way to a 16-6 victory over the Southwest Bears Wednesday night in game one of the best-of-three Coca-Cola/Powerade Baseball Challenge.

Games two and three of the Challenge will be played March 16 in a divisional doubleheader matchup.

The Wolves (3-8) will host the Delgado (LA) Dolphins for a doubleheader on Saturday at Sullivan Field. First pitch is set for 2 p.m.

The rivalry game against Southwest is always one of the most prominent games of the season, especially now that the challenge has been changed to a best-of-three game series.

Southwest took a 1-0 lead in the first inning as leadoff hitter L.D. Coney scored on a Wolfpack error.

The Wolves answered in the bottom of the second inning as they took a 3-1 lead. J.T. Wright led off the inning with a single to left field. Jordan Antley was hit by a pitch.

Justin Oliver singled to center to load the bases with no outs. Kody Smith drew a bases loaded walk that plated Wright. With one out, Austin Irby’s fielder’s choice to the pitcher scored Antley. Champ Davison drove in the final run of the inning on a fielder’s choice to score Oliver.

In the fourth inning, the Bears regained the lead after a single to center field from Tanner Whittington scored Steven Williams. Dylan Spiers then singled to center field bringing in two runs giving the Bears a 4-3 lead.

Everything went Co-Lin’s way in the bottom half of the fourth inning as the Wolves sent 12 men to the plate. Kewan May led off the inning with a single to center and advanced to third on Irby’s single to left. Davison’s RBI single to right scored May. Wright reached on an error that scored Irby. Antley cleared the bases with a triple to right field putting Co-Lin up 7-4. Oliver kept the rally alive with an RBI single to centerfield that allowed Antley to come across the plate. After Oliver advanced to second on an error, Smith singled to right scoring Oliver. May, who started off the inning, reached first as he was hit by a pitch. Irby drew a walk that loaded the bases again for the Wolves. Davison singled to right field bringing home Smith and May. Jeremy Moore knocked in the final run of the inning with a single that plated Irby and the Wolves had a 12-4 lead.

Southwest picked up two runs in the top of the fifth as they closed he gap to 12-6.

The Wolves picked up another run in the sixth inning. Oliver started off the inning with a double to right field and advanced to third on a balk. May drew a 1-out walk. Irby singled to left plating Oliver and the Wolves increased their lead to 13-6.

In the bottom of the seventh, Reed Taylor reached on an error. Wright hit the first homerun for the Wolves this season, a two-run shot deep to left field giving Co-Lin a 15-6 lead.

The Wolves put the game away in the eighth inning. With one out, Irby drew a walk and advanced to second on a wild pitch. Tyler McLeod singled to center. Irby scored on an error by the center fielder giving Co-Lin the 16-6 win.

Cole Langdon earned the win for the Wolves giving up six runs (5 earned) on 10 hits, striking out five and walking four in six innings of work. Tanner Jones threw the final two innings holding the Bears hitless and striking out three.