Lady Wolves advance to finals with win over Holmes 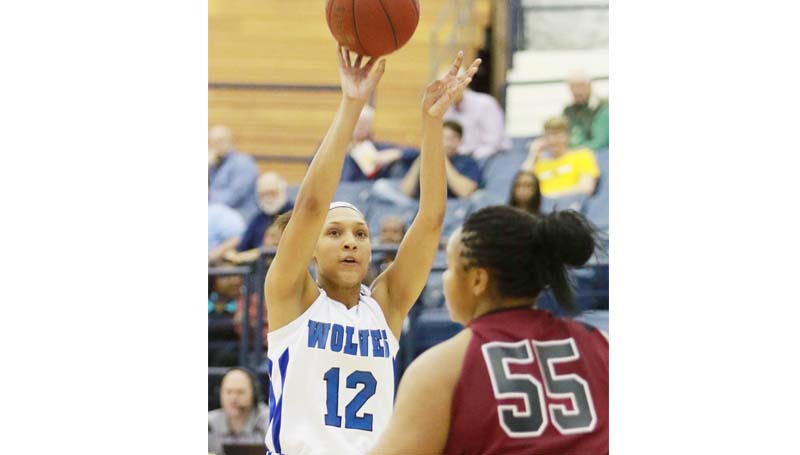 CLINTON – The Co-Lin Lady Wolves defeated the Holmes Lady Bulldogs 64-54 in the semifinals of the NJCAA Region 23 Basketball Tournament Friday to advance to the finals on Saturday at 6 p.m.

The Lady Wolves (23-4) will be taking on the Itawamba Lady Indians (22-6) who defeated Baton Rouge Community College 71-45 in the other semifinal. The winner of the championship game will advance to the NJCAA National Tournament in Lubbock, Texas.

The Lady Wolves fell to the Lady Indians 68-64 in Regionals’ Women championship game.

The Lady Wolves played solid basketball throughout the matchup with the Lady Bulldogs. The action was back and forth early, with several lead changes in the first quarter.

The Lady Wolves came out firing in the second quarter and grabbed the lead, and would not trail for the remainder of the game. Co-Lin played fundamentally under the basket and created easy lay up opportunities.

Sophomore Kelley Allen was the cornerstone under the basket as she scored 16 points and grabbed nine rebounds. The Lady Wolves also had nine steals in the game that gave the team several scoring chances. Alexis Collins played well throughout the game as she shot 4-5 from three-point range. Jamilah Sanders netted only seven points in the game, but led the team in assists with six. She also had three steals and nine boards.

Late in the third quarter the Lady Wolves pulled the game away with a 10-2 run. In the fourth quarter clutch free throw shooting, and good ball control sealed the victory for the Lady Wolves.

Collins led the Lady Wolves in the scoring column with 26 points. Sanders added seven points and nine rebounds. Debraia Bell had another great game off the bench by grabbing 7 rebounds.

Cortirce Golden led the Lady Bulldogs in scoring with 15 points. She also pulled down nine rebounds. Minyone Hill came off the bench for Holmes and netted 14 points. Kawii Perry was the leading rebounder for the Lady Bulldogs with 10.