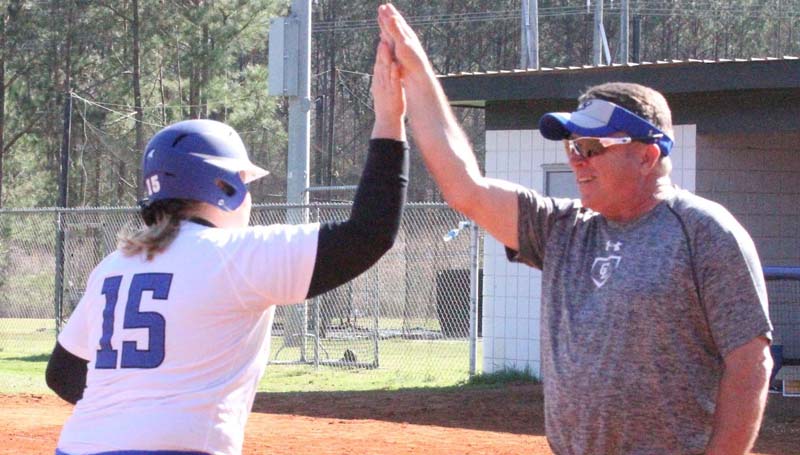 Co-Lin (10-4, 3-1) will travel to Moorhead to play the Mississippi Delta Lady Trojans on Monday for a doubleheader beginning at 1 p.m.

The Lady Eagles outhit Co-Lin 12-7, but the Lady Wolves were able hold on to get the win.

Meridian took a 1-0 lead in the first inning as Anna Lloyd led off the inning with a triple to left field. Brianna Duquette drove Lloyd in on a ground out to second.

Jamie Martin and Kayla Britt led of the second inning with back-to-back singles. Mattie Avants advanced the runners on a ground ball to second. With two outs, Brashier ripped a single to right field to score Martin and Britt to give the Lady Wolves a 3-1 lead. Crum drew a walk advancing Brashier to second. Kaitlyn Taylor smashed a double to the centerfield fence to score Brashier increasing Co-Lin’s lead to 4-1.

Meridian would add a run in the top of the third. Kandler Flora would reach second base on an error and advance to third on a passed ball. Lloyd would single to drive in Flora as the Lady Eagles would cut the lead to 4-2.

The Lady Eagles would plate another run in the top of the sixth as Keelee Ladnier singled centerfield. Alexandria Riser would follow with a single to left field. With two outs, Ivey Brewer would single to single to right field to score Ladnier to pull to within one run at 4-3.

Meridian would threaten to score the tying run in the top of the seventh inning. With one out, Mycahla Howard would reach on a two-base error by the Lady Wolves. Ladnier would single and advance Howard to third. But Co-Lin pitcher Kaitlyn Taylor would get Riser to fly out and pinch hitter Anna Lewis to ground out to second to end the game.

Taylor picked up the win for the Lady Wolves allowing three runs (2 earned) on 12 hits, striking out five and walking one pitching the complete game.

Payton Fox absorbed the loss giving up four runs on seven hits, striking out one and walking three in six innings of work.

At the plate for the Lady Wolves, Brashier led the way with two singles (1 RBI). Taylor doubled (1 RBI). Adding support with a single apiece were Crum (1 RBI), Trevlyn Scott, Martin, and Britt.

Lloyd would lead Meridian with a triple and two singles (1 RBI). Ladnier and Howard had a pair of singles. Duquette (1 RBI) and Brewer (RBI) added support with a single apiece.

The Lady Eagles rallied to score two runs in the top of the seventh inning and break the 5-all tie to get the 7-5 win.

Meridian took a 3-0 lead in the top of the first inning. The Lady Wolves closed the gap to 3-1 in the bottom half of the inning as Crum hit a solo home run over the left field fence.

In the bottom of the second, Brittany Barbay reached on an error. Scott followed with a home run over the center field wall to tie the game at 3-all.

The Lady Wolves took a 5-3 lead in the bottom of the third inning. Brashier reached on a two-base Meridian error. Crum smashed an RBI single to center field to score Brashier. Taylor reached on an error. With one out, Scott drew a walk. Dianna Hobgood singled to left field to plate Taylor and put the Lady Wolves up 5-3.

Meridian would cut the lead to 5-4 in the top of the fifth inning. With one out, Howard doubled to center and Ladnier singled to center. Riser would follow with an RBI single to score Howard.

The Lady Eagles would tie the game at 5-5 in the top of the sixth inning. Duquette singled and advanced to second on a single by Howard. Ladnier singled plating Duquette.

The Lady Wolves threatened in the bottom of the seventh, but left 2 runners stranded on base.

Chelsea Thorton pitched the complete game to get the win for Meridian. She allowed five runs (2 earned) on 12 hits, struck out one and walked three.

The teams combined for 27 hits in the game.

For Co-Lin, Scott and Hobgood were 3-for-3 in the game. Scott had a home run and a single (2 RBIs). Hobgood singled twice (1 RBI). Crum homered and singled (2 RBIs). Vanlandingham, Brashier, Barbay, and Byrd added support with a single apiece.

Ladnier and Howard led the Lady Eagles with a double and two singles apiece (1 RBI). Lloyd had three singles. Lewis and Riser (2 RBIs) had a pair of singles each. Duquette and Kandler Flora hit safely.