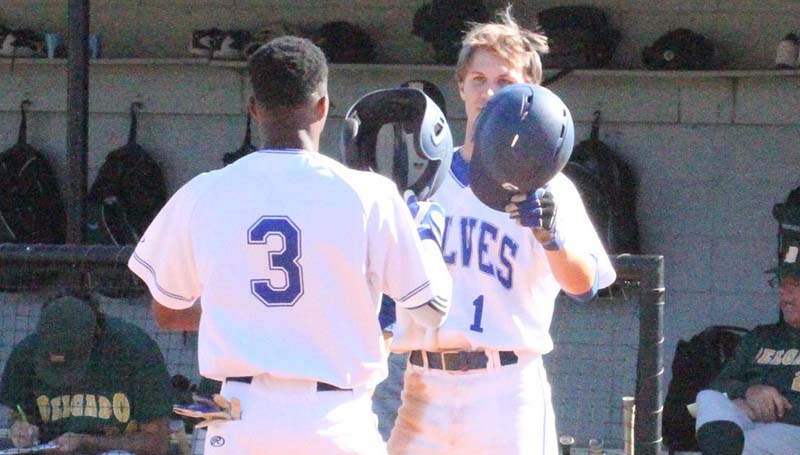 Co-Lin Media / Natalie Davis / Co-Lin’s Kewan May (3) is greeted at home plate by teammate Austin Irby after hitting his first home run of the season.

WESSON – The Co-Lin Wolves split a doubleheader with the Delgado Dolphins winning game one 5-3 and narrowly losing game two 9-8 Saturday.

The Wolves racked up an impressive 21 hits over the two game series and hope to keep the hot bats going as the team travels to Moorhead to take on Mississippi Delta for a doubleheader on Saturday beginning at 1 p.m. Listen live at www.colinathletics.com or WMJU 104.3 FM in Brookhaven.

Champ Davison got things going for the Wolves in the bottom of the first with a single to right field that brought in Austin Irby for the first run of the game.

In the second inning, Kewaun May cranked a solo shot deep to left that extended the Wolves lead to 2-0.

The Dolphins got on the scoreboard in the top of the third inning. But the Wolves would answer as Jordan Antley drove in Reed Taylor in the bottom of the inning with a line drive single to center field.

The Wolves plated another run the fourth inning as Jeremy Moore roped a single to left that brought Irby across the plate for his second run of the game and increase the Wolves lead to 4-1.

The Dolphins would close the gap at 4-3 in the top of the fifth scoring two runs on a bases loaded walk and a passed ball.

In the sixth inning, Co-Lin’s Davison would give the Wolves a little breathing room as he knocked in another run with a single that plated May for the final run of the game at 5-3.

At the plate for Co-Lin, Antley (1 RBI) and Davison (2 RBIs) finished the game with two singles apiece. May added a home run and a single (1 RBI). Irby and T.J. Wright doubled. Also adding support was Moore (1 RBI) with a single.

Miles Thomas picked up the win for the Wolves giving up three runs (1 earned) on six hits, striking out three and walking four in 4.1 innings of work. Austin Douglas relieved Thomas to earn the save. He pitched 2.2 innings allowed one hit, struck out three, and walked one.

Evan Hileman suffered the loss for Delgado after throwing 3.2 innings and giving up 6 hits and 4 runs (all earned).

The Dolphins took advantage of seven Co-Lin errors in the game.

Delgado jumped out to a 1-0 lead in the top of the first inning. The Wolves answered in the bottom half of the inning on an RBI single by Reed Taylor that plated Austin Irby tying the game at 1-1.

The Dolphins added six runs in the top of the second to take a 7-1 lead as the Wolves committed two errors, hit two batters and had a wild pitch. Delgado’s Owen Magee ripped a three-run home run in the inning.

The Wolves responded with a rally of their own in the bottom half of the inning. Jackson Twitty doubled right scoring Justin Oliver who singled. Matthew Mordecai and Irby provided back-to-back singles to load the bases. Champ Davison singled to center to plate Twitty. T.J. Wright’s double to right scored Irby and Davison. Taylor’s sacrifice fly scored Moore to narrow Delgado’s lead to 7-6.

In the third inning, the Dolphins increased their lead to 8-6 as they took advantage of two Co-Lin errors. In the bottom half of the inning, the Wolfpack would close the gap to 8-7 with a run as Twitty would score thanks to a Delgado error and wild pitch.

Delgado would add an insurance run in the top of the fourth as the Wolves committed two more errors.

The Wolves would mount a rally in the bottom of the sixth. With one out, Taylor doubled to left field. Oliver doubled to right field to score courtesy runner Kewan May to close the gap to 9-8.

Taylor led the Wolves at the plate with a double and two singles (2 RBIs). Wright (2 RBIs) and Oliver (1 RBI) doubled and singled. Davison had a pair of singled and one RBI. Twitty doubled for an RBI. Irby and Mordecai added support with a single apiece.

For Delgado, Daniel Lahare led the way with a double and a single (2 RBIs). Robert Podorsky and Christian Volin had two singles and one RBI apiece. Magee homered for three RBIs. Adding support was J.P LaGreco with a single.

Jordan Antley suffered the loss for the Wolves giving up seven runs (1 earned) on six hits, striking out three in 1.1 innings of work. J.D. Evans threw 1.2 innings and gave up two hits and one run (unearned). Austin Odom threw two innings and gave up one run (unearned) on one hit and struck out one. Steven Ginn pitched the final two innings striking out two.