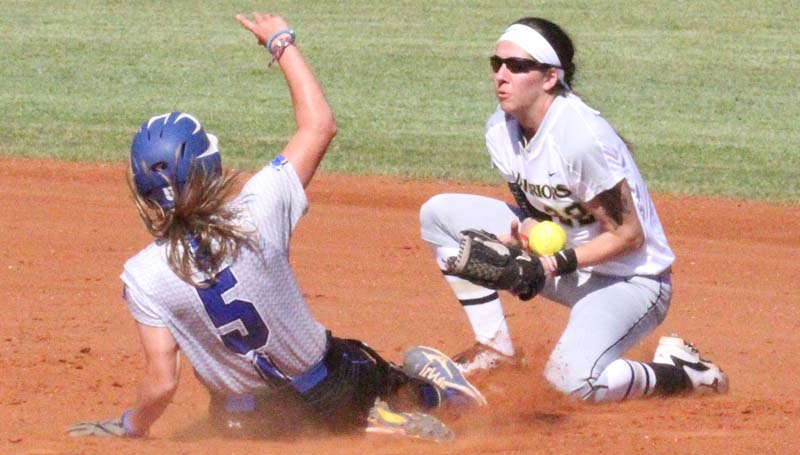 WESSON – Late game rallies were not enough for the Co-Lin Lady Wolves as the team dropped a doubleheader to the No. 3 ranked East Central Lady Warriors Tuesday night.

The Lady Wolves (18-8) fought hard in both games with productive innings late in both games. A three-run bottom half of the seventh inning sent game one into extra innings, and a two-run sixth in the second game narrowed the gap. However, neither effort paid off with a win.

The Lady Wolves are back in action Friday as the team travels to Goodman to take on the Holmes Lady Bulldogs for a doubleheader beginning at 1 p.m.

East Central could not have asked for a better start to the series as Caitlyn Aldous went yard in the first at bat to leap to 1-0 lead. The Lady Warriors added another run shortly after with a single ripped to right, Meagan Ellis scored from second.

The Lady Wolves plated a run in the bottom of the third when Kamryn Vanlandingham doubled deep to left. Mackenzie Byrd, who reached on a single, came all the way around to score. East Central answered with Ellis driving in two runs in the fourth extending the lead to 4-1.

The score remained until Co-Lin’s final at bat in the bottom of the seventh. Vanlandingham smashed a double to center field that scored Mattie Avants to start the rally. With runners on second and third, Lauren Brashier kept her eye on the ball and drew a walk to load the bases for Jessica Crum. Crum, who leads the nation with 14 homeruns, was intentionally walked to bring home Byrd to close the gap to 4-3. Kaitlyn Taylor made East Central question the strange decision to intentionally walk in a run as she followed with a sacrifice fly that scored Vanlandingham and tied the game at four-all.

In the top of the eighth, the Lady Warriors scored three runs to take a 7-4 lead. Elizabeth Frey reached on an error. Caitlyn Aldous sacrificed Frey to second. Summer Lavender smashed a double to center field scoring pinch runner Abby Winstead for a 5-4 lead. Mahalia Gibson followed with a two-run homer to give East Central the 7-4 lead.

The Lady Wolves tried to rally in the bottom half of the inning. Brittany Barbay drew a lead off walk. Mattie Avants followed with a single to left. Mackenzie Byrd doubled to center field to plate Barbay to close the gap to 7-5. East Central pitcher Lacey Hill struck out the next three batters leaving the tying runs stranded.

“It was a good comeback to force the extra innings,” said Lady Wolves head coach Allen Kent. “We left the winning and tying runs on base in the seventh and eighth innings.”

For East Central, Brittany McCray led the Lady Warriors with three singles. Aldous and Gibson each had a home run and a single (1 RBI). Maegan Ellis (1 RBI) and Frey had a pair of singles (1 RBI). Also hitting safely was Andi Hannaford.

Taylor took the loss for Co-Lin giving up seven runs (four earned) on 13 hits, struck out five and walked three in eight innings of work.

Hill picked up the win for the Lady Warriors as she also went the distance allowing five runs (four earned) on nine hits, walking seven, and striking out nine.

The Lady Warriors came out firing once again in game two. The team knocked in five runs in the top of the first frame.

Co-Lin answered in the bottom of the inning. Kamryn Vanlandingham led off the inning with a single to right field. With on out, Jessica Crum sent a home run over the left field fence to cut the East Central lead to 5-2. Crum leads the nation in home runs with 14.

East Central continued to pour in runs in the second as Katlyn Duke hit a three-run homerun to extend the lead to 8-2.

Trevlynn Scott helped narrow the lead in the third with a line drive to center field that brought home Lauren Brashier.

In the bottom of the sixth, Co-Lin added two more runs. Crum was again intentionally walked with the bases loaded for a free run, and Dianna Hobgood hit a sacrifice fly to center that scored Brashier, who singled earlier. The late runs were not enough as the Lady Wolves were unable to score anyone in the bottom of the seventh.

“We just got down early,” said Kent. “I thought we gave them two good games, but we aren’t looking for moral victories. It’s been a tough stretch facing three nationally ranked opponents in one week, but we have a very solid team and have to look ahead.”

The Lady Warriors were led by Caitlyn Aldous finished the game with two doubles and a pair of singles. Katlyn Duke added a homerun, double and single for five RBIs. Mahalia Gibson had a double and a single (1RBI). Courtney Moore doubled and singled (1 RBI). Adding support with a single apiece were Britney McCray and Elizabeth Frey.

Absorbing the loss for the Lady Wolves was Taylor who lasted 0.2 innings. She allowed five runs (four earned) on four hits and struck out one. Kamry Creel threw the remainder of the game giving up four runs (1 earned) on nine hits, walked one and struck out two in 6.1 innings.

Chloe Thaggard posted the win for the Lady Warriors as she threw the complete game. She allowed five runs on 11 hits, walked six and struck out four.