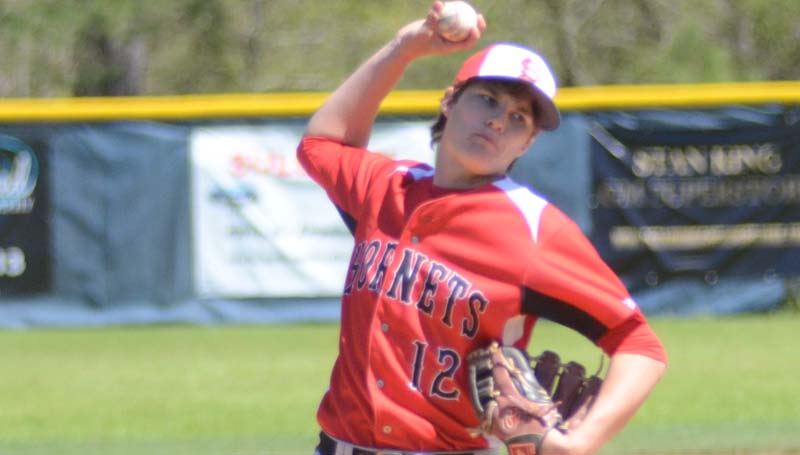 “Glad to get another win,” said Loyd Star coach Jared Britt. “The guys played hard, but we still have a lot of things to work on to get ready for a tough series against Enterprise starting Tuesday. Overall, I was pleased with our effort. Konner Allen pitched a good game.”

The Hornets (9-3, 4-0) will return to action Tuesday as they visit Enterprise to battle the Jackets in a big Region 7-2A series. Junior varsity action begins at 4:30 p.m., followed by the varsity game at 6:30 p.m.

After battling through a scoreless first inning, Loyd Star managed to get their offense going in the top of the second and plated three runs to take a 3-0 lead.

The Bobcats managed to get on the scoreboard in the bottom of the third inning, scoring one run to cut into Loyd Star’s lead.

The Hornets would add to their lead in the fourth and fifth innings to push the margin to 8-1, but the Bobcats would rally back in the bottom of the fifth, scoring four runs to keep the game close at 8-5.

In the top of the seventh, Loyd Star cashed in two more runs and held on for the victory.

Konner Allen went the distance for the Hornets to collect the win with 11 strikeouts, three walks and three hits by pitch.

Trey Nettles suffered the setback on the rubber for Bogue Chitto with one strikeout and three walks. Tanner Gunther (1K, 0BB) also pitched in relief.

Tucker Lambert and Conner Douglas paced the Bobcats with a double and a single each. Grant Leake hit two singles. Tyler Brumfield and Brandon McKenzie had a double each.

In junior varsity action, Bogue Chitto and Loyd Star finished with a 5-5 tie.

Dylan Smith directed the Hornets with two singles. Cole Smith had a double and Patrick Price hit a single.

The Bobcats were led at the plate by Darius Porter, Michael Rayborn, Trey Crittenden and Tyler Merritt with a single each.