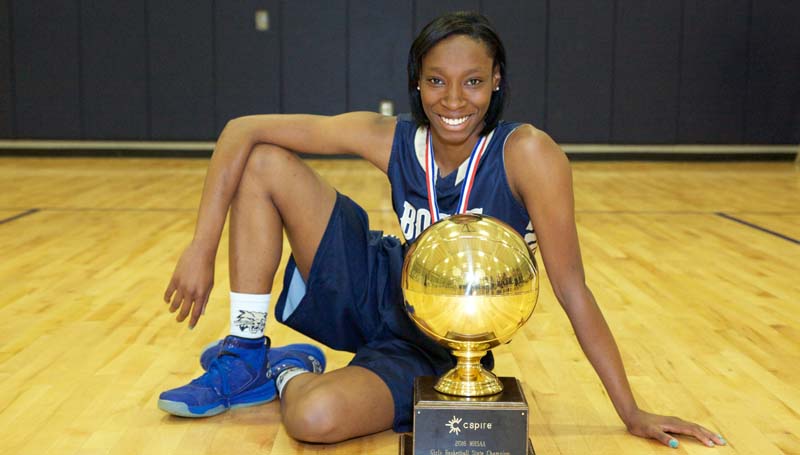 Bogue Chitto senior guard Zariah Matthews, along with her teammates, had a magical season, storming through the regular season and postseason to finish the year with a 31-3 record.

Matthews’ skill on the court is well known and opposing coaches tried to find ways to slow her down or keep the ball out of her hands. They mostly failed.

For these accomplishments, Matthews has been named the Most Valuable Player on The Daily Leader’s 2016 All-Area Girls Basketball Team and the title of Miss Basketball for the second straight year.

“I feel very honored to be selected as The Daily Leader’s Most Valuable Player in girls basketball for the second straight year,” said Matthews.

Joining Matthews on the DL’s Dream Team are Shakirianna Jefferson of Bogue Chitto; McKenzie Smith, Jordan Shelby and Hannah Dickerson of Loyd Star; Hanna Moak and Jana Case of West Lincoln; Courtney Greer and Carlee Nations of Enterprise; and Camryn Davis of Lawrence County. The team was selected by the DL sports staff, with input provided by area high school and college coaches.

Zariah Matthews, 18, is the daughter of Fredricka Perkins and Kenric Matthews. Her jersey number on the Lady Cats basketball team is No. 2.

“It was everything I could have dreamed of. Everybody on the team worked extremely hard during the regular season and in the playoffs to accomplish our goal. I think we were very deserving of the opportunity to win state.”

Matthews said she was thankful for her coach, Christi Terrell.

“I really appreciate everything that Coach Terrell has ever done for me. She has pushed me into being the athlete that I am today. I am very thankful to have her as my coach.”

The Mississippi College signee plans to major in secondary education. She wants to teach math and coach basketball.

Terrell had plenty of praise for Matthews.

“Zariah is an unselfish player that cares about her teammates,” she said. “She has really stepped up her game this year. I am very proud of her and I can not wait to watch her play in the years to come.”

Shakirianna Jefferson,  a junior/senior forward for Bogue Chitto, had a break-out season as she averaged 9.7 points and 2.7 rebounds per game.

McKenzie Smith,  a junior forward at Loyd Star, averaged 19.3 points, 8.8 rebounds and 2.6 steals per game this season. She was selected as the Region 7-2A girls’ MVP and was selected to play on the MAC South girls All-Star team.

Hanna Moak,  West Lincoln’s senior forward, averaged 11.6 points and 6.7 rebounds per game and helped the Lady Bears advance to the first round of the state playoffs.

Camryn Davis,  a sophomore forward for Lawrence County, averaged 13.5 points, nine rebounds, 3.4 steals and 1.1 blocks per game. She shot 48.7 percent from the field and was named to the all-district team.