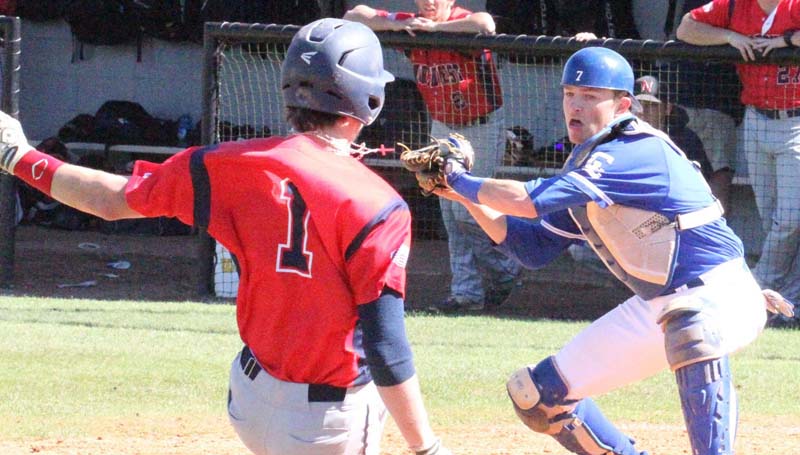 WESSON – The Co-Lin Wolfpack dropped a doubleheader to the Northwest Rangers 6-2 and 7-5 on a beautiful day for baseball Saturday.

The Wolves (7-18) travel to Decatur on Tuesday for a doubleheader against the East Central Warriors. Listen live at wwww.colinathletics.com or on WMUJ 104.3 FM in Brookhaven.

After four scoreless innings, the Wolfpack got on the scoreboard first in the bottom of the fifth. With one out, Jordan Antley reached on an error. T.J. Wright reached on another Northwest error that scored Antley to give Co-Lin a 1-0 lead.

Northwest would answer with five runs in the top of the seventh aided by two hit batsmen and two Wolfpack errors. Hunter Wilson reached on an error. Ryan Skainik was hit by a pitch. Aaron Campbell’s RBI double tied the game at 1-1. David Herrington was hit by a pitch to load the bases. Jamell Newson walked to score Skainik and give the Rangers a 2-1 lead. Tanner Lloyd reached on a Wolfpack error as Campbell crossed the plate. A sacrifice fly by Jake McPhail plated Herrington to put the Rangers up 4-1. Northwest’s final run of the inning came as Wilson’s RBI single to left field scored Newson.

In the top of the seventh, Northwest pitcher hit Tyler McLeod and Jeremy Moore and it appeared that the Wolfpack may start a rally. McLeod and Moore advanced to second and third on a ground out by T.J. Wright. Kody Smith would single to score McLeod to close the Northwest lead to 5-2, but the Wolfpack could not manufacture anymore runs.

The final Northwest run came in the top of the eighth. Campbell led off the inning with his second double of the game and advanced to third on a passed ball. Cody Cooper drove in Campbell with a sacrifice fly to left field to give the Rangers a 6-2 lead.

Cole Langdon absorbed the loss for the Wolfpack allowing five runs (one earned), on two hits, striking out four and walking one in six innings of work. Tanner Jones pitched an inning giving up one earned run on three hits. Ryan Cullop finished the game pitching a hitless 1.2 innings.

Colt Smith picked up the win allowing two runs (one earned) on three hits, striking out two and walking two. J.R. Miller earned the save giving up one hit and striking out one.

At the plate for the Wolfpack, Kody Smith led the way with a pair of singles for one RBI. Matthew Mordecai and Jeremy Moore hit safely.

Campbell led the Northwest hitting attack with a pair of doubles (1 RBI). Wilson added a pair of singles (1 RBI). Adding support with a single was Newson (1 RBI). Also picking up RBIs were Cooper, Lloyd and McPhail.

The Rangers rallied for four runs in the seventh inning to take a 7-5 win over the Wolfpack.

Northwest jumped out to a 1-0 lead in the first inning. Hunter Wilson reached on an error and advanced to second on Ryan Skainik’s single to left field. Both runners advanced on a wild pitch. Wilson scored on Aaron Campbell’s ground ball to second.

The Wolfpack would answer with three runs in the bottom of the third. T.J. Wright led off the inning with a double to left field. Jeremy Moore followed with a single and stole second base. Jordan Antley reached on a fielder’s choice as courtesy runner Kewaun May was thrown out at the plate. Jackson Twitty walked to load the bases. Justin Oliver reached on a fielder’s choice as Moore crossed the plate to tie the game at 1-all. Oliver advanced to second throwing error by the second baseman allowing Antley to score. Austin Irby singled to left field to plate Oliver and put the Wolfpack up 3-1.

Co-Lin picked up another run in the bottom of the fourth. With one out, Oliver drew a walk. Irby reached on an error and Oliver advanced to second. Champ Davison’s RBI single to centerfield scored Oliver and increased the Wolfpack lead to 4-1.

The Wolfpack looked to be cruising along until the top of the seventh. Campbell drew a lead off walk. David Herrington reached on a fielder’s choice. With two outs, Jamell Newson singled to right field. Tanner Lloyd drew a walked to load the bases. Jake McPhail reached on an error that scored Herrington and Newson to pull the Rangers to 4-3. Northwest would tie the game as Wilson’s two-run RBI single to left field plated Lloyd and McPhail as the Rangers would take a 5-4 lead.

Co-Lin would answer in the top of the sixth. With one out, Oliver singled. Irby followed with a double to right field. Davidson’s sacrifice fly would score Oliver and tie the game at 5-all.

The Rangers would plate two runs in the top of the seventh. Campbell led off with a single. With two outs, Newson singled. Lloyd’s two-run RBI single to center would score pitch runner Hunter Bishop and Newson giving the Rangers the 7-5 lead.

For Northwest, Boyd doubled and singled. Newson had a pair of singles. Hitting safely were Wilson (2 RBIs), Skaink, Campbell (1 RBI), and Lloyd (2 RBIs).

Austin Odom was the losing pitcher giving up four runs (no earned) on one hit, striking out one and walked three in .2 innings. Starter Miles Thomas pitched five innings allowing 1 run (no earned), struck out three and walked one. Also seeing action was Steven Ginn who gave up two earned runs on four hits and struck out one.