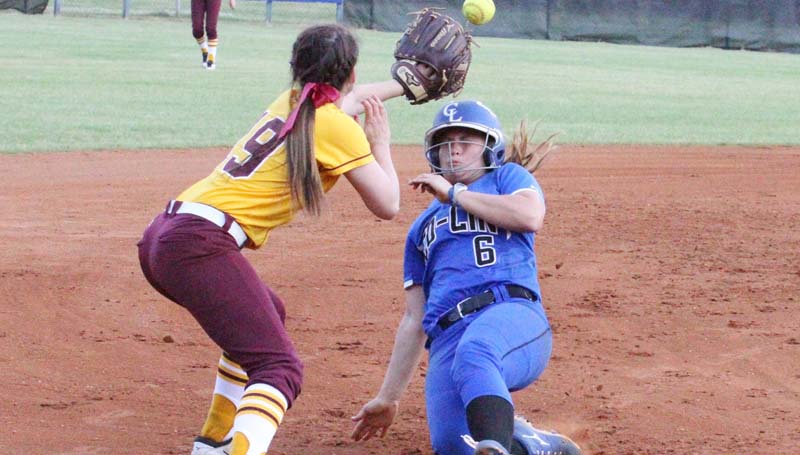 WESSON – The Co-Lin Lady Wolves picked up two important wins Tuesday as they swept the Pearl River Lady Wildcats 10-2 and 8-5 to improve to 26-8 overall, 17-5 in the MACJC.

The Lady Wolves travel to Booneville Friday to take on the Northeast Lady Tigers for a doubleheader beginning at 2 p.m.

Co-Lin won game one decisively with an eight-run rule victory, 10-2 in five innings.

The Lady Wolves took an early 4-0 lead in the first inning. With one out, Lauren Brashier and Jessica Crum drew walks. Kaitlyn Taylor blasted a three-run line drive home run to right field to give Co-Lin a 3-0 lead. Brittany Barbay drove in Dianna Hobgood, who walked earlier in the inning, with a single to center bringing the Lady Wolves to a 4-0 lead after the first.

The Lady Wildcats cut the lead to 4-2 in the top of the second as Skylar Cook’s two-run double plated Reilly Bunnell and Rachel Brockhaus.

Co-Lin did more damage in the fourth. Brashier got the rally started with a single to right that plated both Barbay and Kamryn Vanlandingham. Later in the inning with the bases loaded, Hobgood roped a single to right field to clear the bases and give the Lady Wolves a 9-2 advantage.

In the top of the fifth, the Lady Wolves scored the final run of the game when Barbay doubled to left. Mattie Avants reached on an error that would score pinch runner Katie Grace Culpepper to give Co-Lin the 10-2 lead.

Barbay led the Lady Wolves with a double and a single (1 RBI) Taylor had a home run (3 RBIs). Hobgood (3 RBIs), Brashier (2 RBIs) and Vanlandingham added a single apiece. Crum, the nation’s home run leader, was intentionally walked all three of her plate appearances.

Skylar Cook suffered the loss for the Lady Wildcats after throwing 3.2 innings. She gave up nine runs (eight earned) on five hits, and walked seven.

“Kamry Creel stepped up and gave us a quality start today scattering five hits,” praised Lady Wolves head coach Allen Kent. “We were disciplined and had some really good quality at bats.”

The Lady Wolves buckled down late in game two to secure the victory after the Lady Wildcats managed to score three runs in their final two at bats narrowing the margin to 8-5.

Pearl River lit up the scoreboard first in game two after Kristen Martin hit a two run homer in the top of the first inning.

The Lady Wolves quickly answered plating three runs in the bottom half of the inning. With one out, Lauren Brashier reached on an error. Crum was intentionally walked. Brashier and courtesy runner Greta Carley advanced on a passed ball. Kaitlyn Taylor singled to left scoring Brashier. Carley tied the game at two-all as she scored on a passed ball. Dianna Hobgood grounded out to the shortstop for the second out of the inning allowing Taylor to score from third giving the Lady Wolves a 3-2 lead.

Co-Lin would score four runs in the second inning. Mattie Avants drew a lead off walk. Kamryn Vanlandingham reached on an error. Brashier ripped a double to center field that scored Avants. Taylor singled up the middle to score Vanlandingham. Crum was intentionally walked. Taylor’s RBI single brought in courtesy runner Carley as the Lady Wolves lead grew to 7-2.

In the bottom of the third with two outs, Brashier singled to right field. Crum again was intentionally walked. Taylor’s RBU single to left brought in Brashier as the Lady Wolves lead increased to 8-1.

The Lady Wildcats added another run in the seventh on a Co-Lin throwing error to make the final score 8-5.

“Trevlynn picked up a great win for us today, while KT (Kaitlyn) came in to preserve the victory,” said Kent. “Taylor again came up with three clutch RBIs, making them pay for intentionally walking Crum all seven at bats today. This was a good day for us, extending our division winning streak to eight games.”