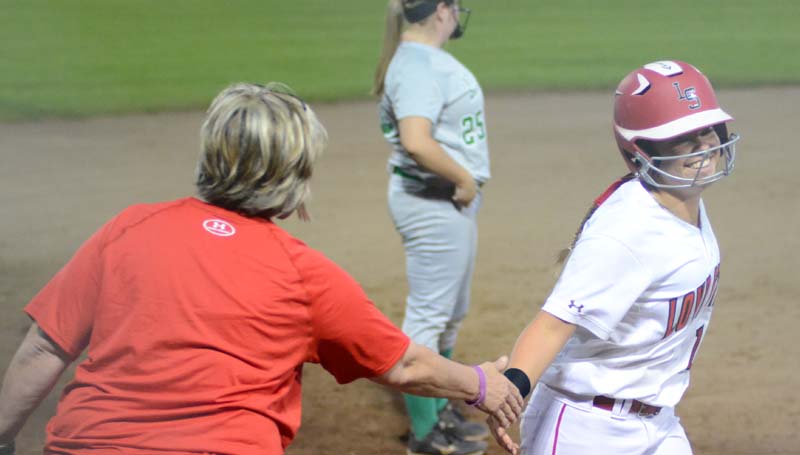 Daily Leader / Marty Albright / Loyd Star’s Megan Norton is congratulated along the third base line by head coach Jan Delaughter after hitting a solo homerun in the fifth inning against West Lincoln.

“Makenzie Smith pitched a great game for us,” said Loyd Star coach Jan Delaughter. “Offensively, we finally started to hit the ball a lot better. Overall, I was pleased with efforts and glad to get the win.”

The Lady Hornets (12-5, 5-1) will be in action Saturday when they host a softball tournament. Loyd Star will start the tournament games at 8:30 a.m. against Wesson and play Sumrall in the finale at 7 p.m.

The Lady Bears (7-6, 2-3), coached by Andrew Redd, will continue action today when they host the Prentiss Lady Bulldogs in a varsity doubleheader, starting at 5 p.m.

After three scoreless innings, Loyd Star caught fire at the plate and scored all of its runs in the fourth, fifth and sixth innings. 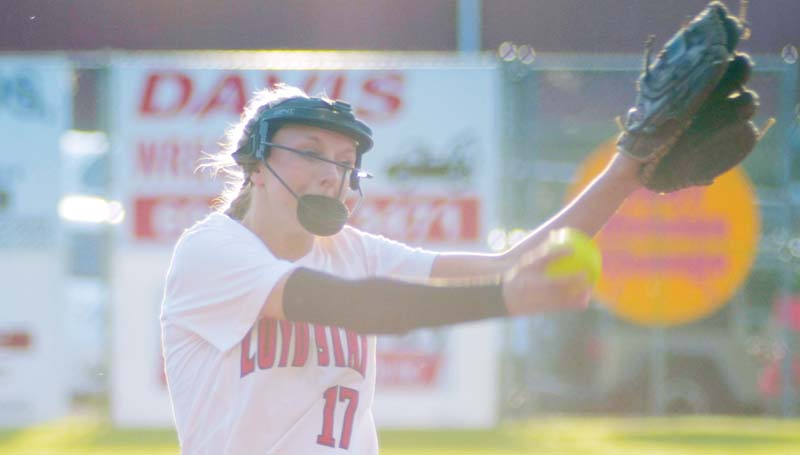 Makenzie Smith dominated on the rubber for the Lady Hornets. She finished with nine strikeouts, no walks and gave up two hits.

Megan Gerald suffered the setback in the circle for the Lady Bears with four strikeouts, three walks and two hit batters.

Makennah Redd and Anna Brooke Davis were the top hitters at the plate for West Lincoln with a single each.

“We got to find a way to finish out playing a full seven innings of softball,” said Redd. “Loyd Star played a great game tonight. They definitely earned the win.”

Ashley Tabor absorbed the setback on the rubber for the Lady Bears with one strikeout, three walks and one hit batter.

Christie Rose Patterson and Floyd directed the Lady Hornets with a double each. Carly Beth Wallace hit a single.