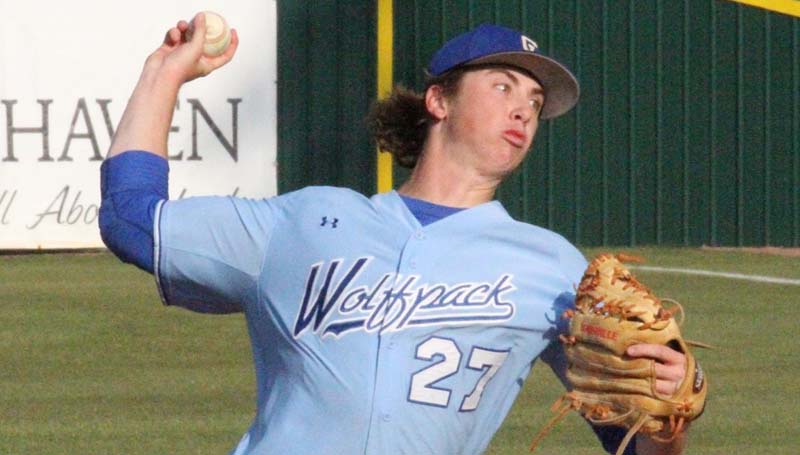 WESSON – Co-Lin picked up a much-needed win Saturday splitting a doubleheader with Northeast Mississippi. The Wolves (8-21) dropped game one 10-6 and won game two 8-6 with the help of a J.T. Wright grand slam.

The Wolves take the field again Wednesday as they hosts Hinds beginning at 3 p.m.

Northeast took an early lead scoring two runs in the first inning and extended their lead to 7-0 after the top of the third inning.

The Wolves responded in the bottom half of the third inning. Champ Davison laid down a bunt to get on base. Jeremy Moore followed with a hard hit double to left field to close the gap to 7-1.

The Tigers scored two more in the fourth after a routine out turned into a throwing error for the Wolves.

Matthew Mordecai led off the bottom half of the fourth inning with a double for Co-Lin. He later scored off of a single to left from Austin Irby. Justin Oliver crossed the plate later in the inning, taking advantage of a passed ball. Davison drew a walk with the bases loaded that scored Jackson Twitty. Reed Taylor followed Davison with a sacrifice fly to center that plated Irby to cut the Tigers lead to 9-5.

Northeast brought home yet another run in the fifth after a sacrifice fly, giving the Tigers a 10-5 lead.

Mordecai scored the final run of the contest in the bottom of the fifth on a passed ball to make the final score 10-6.

Mordecai led Co-Lin at the plate with a pair of doubles and a single. Irby collected three singles (1 RBI). Davison added a pair of singles. Moore (2 RBIs) and Twitty had a double apiece. Adding support with a single each were J.D. Evans and Tyler McLeod.

For Northeast, Josh Stillman and Garrison Howell led the Tigers from the plate with three hits each. Stillman had three RBIs and Ryan Watts drove in two.

Miles Thomas suffered the loss for the Wolfpack giving up seven runs (six earned) on nine hits in 2.1 innings. Austin Odom relieved Thomas in the third inning. He allowed three runs (one earned) on three hits, struck out one and walked four. Tanner Jones pitched the final two hitless innings striking out three.

The Wolves lit up the scoreboard first in game two in the bottom of the second inning. With the bases loaded, J.D. Evans hit a deep sacrifice fly that scored courtesy runner Kewaun May. Matthew Mordecai stole home in the inning after Kody Smith got caught in a run down for the final out giving the Wolfpack a 2-0 lead.

The Tigers quickly tied the game at two-all in the top of the third after a throwing error scored two runs.

The Wolves pulled away in the bottom half of the third inning. After loading the bases, J.T. Wright came to the plate and crushed a grand slam to left field. The four-run shot gave Co-Lin a 6-2 lead. Evans drove in another run later in the inning with a single that plated Tyler McLeod.

The Tigers made a late rally in the sixth inning scoring four runs, two of which were the direct result of fielding errors from the Wolves. Co-Lin contained the damage and held off the Tigers to clinch the victory.

Wright led the way for the Co-Lin with a grand slam and a single for 4 RBIs. Austin Irby and Champ Davison had a pair of singles. Evans collected a single for two RBIs. Also hitting safely were McLeod, and Mordecai. Moore added an RBI.

Starter Cole Langdon earned the win for the Wolves allowing six runs (three earned) on seven hits, striking out three and walking four in 5.1 innings of work. Ryan Cullop got the save throwing 1.2 hitless innings and striking out one.