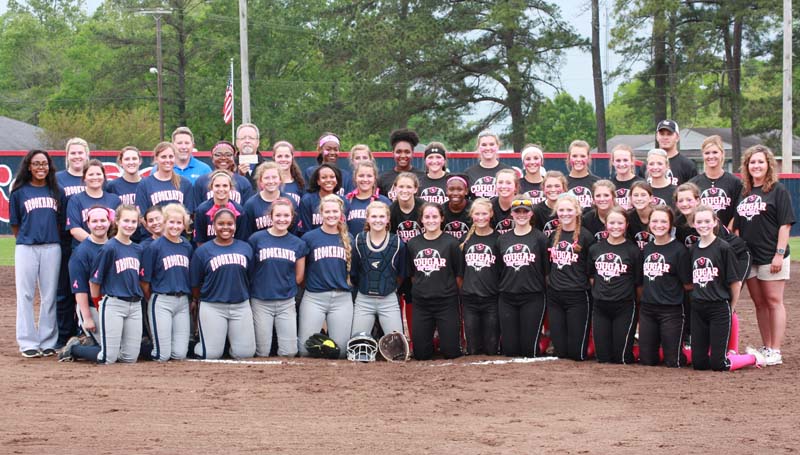 The Brookhaven Lady Panthers won a 9-8 nail-biter over the Lawrence County Lady Cougars Tuesday night at the second annual Pink Game at Brookhaven.

The Pink Game is held to support breast cancer awareness in the community. The Ole Brook Softball Boosters Club made a donation to the King’s Daughters Medical Center Foundation in support of Breast Cancer Awareness during pregame ceremonies. Johnny Rainier, with KDMC, accepted the check from BHS coach Mandy Vinson in the opening ceremony. David Culpepper, KDMC marketing director, threw out the first pitch of the game.

Each team wore jerseys with pink on them.

Lawrence County scored the first two runs of the game in the third inning with a homerun from Josey Nations. Brookhaven answered with a three-run homerun from Katherine Shell to make the score 3-2. BHS’s scoring did not stop, as the third inning was all Lady Panthers. Jada Henderson jumped into the mix with her own three-run homerun in the third. The Lady Panthers batted around in the inning with Haley Speaks hitting a double and Tia Bussey, Kat Wallace, Macy Ziskin and Rileigh Allen hitting a single. By the end of the third, Brookhaven was up 8-2.

The Lady Panthers would also plate a run in the fifth inning to bring the score to 9-2.

It would not be until the sixth inning that Lawrence County would put another three runs across the plate. They also scored three runs in the top of the seventh, but came up short.

“Tonight was our second annual Pink Game with Lawrence County,” said BHS coach Mandy Vinson. “It was good to pick up a win tonight. Lawrence County has a very good team. I am proud of our girls for hitting the ball well during the game. Katherine Shell and Jada Henderson both hit homeruns tonight that really helped our momentum.”

Katherine Shell was the winning pitcher with six strikeouts and two walks.

Elizabeth Smith absorbed the setback for Lawrence County in relief of Jordan Harp, who started the contest. Harp had one strikeout and three walks in 2.1 innings of play. Smith had six strikeouts and four walks in 3.2 innings.

In JV action, Brookhaven won the contest 5-1 over Lawrence County.

Leading the Lady Panthers in hitting were Rileigh Allen with three singles and Madison Thompson with two singles. Jada Henderson and Meg Foster each had a single.