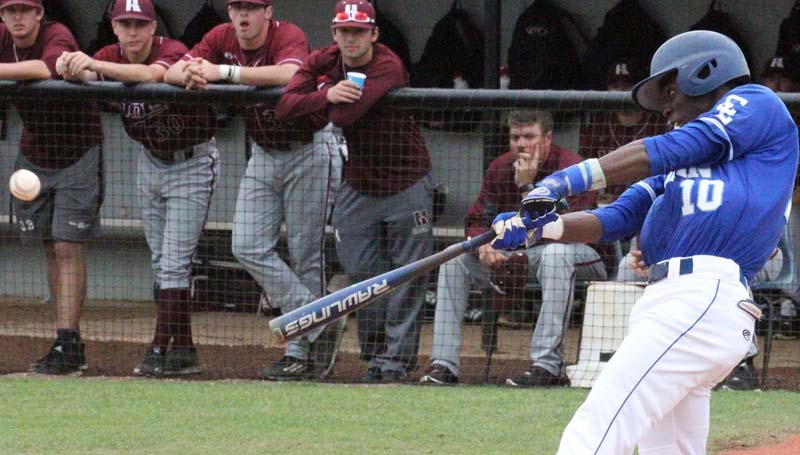 Co-Lin Media / Co-Lin’s Champ Davison gets one of his four hits on the day against Hinds.

WESSON – The Hinds Eagles took advantage of 11 Co-Lin miscues as they swept a conference doubleheader 11-7 and 7-6 Tuesday night.

The Wolves (8-23) travel to Clarksdale take on the Coahoma Tigers on Saturday beginning at 12 p.m.

The Hinds Eagles rallied for eight runs in the final two innings to claim the game one win.

Co-Lin took an early 3-0 lead after three innings. In the second inning, Matthew Mordecai drew a walk. Justin Oliver followed with a single to centerfield. Jackson Twitty drove in Mordecai to give the Wolfpack a 1-0 lead. With runners on the corners, the Wolves pulled off a double steal. Twitty, who was attempting to steal second, got caught in a run down, but the delay allowed Oliver to steal home to give the Wolves a 2-0 lead.

Champ Davison led off the bottom of the third inning on an infield single and stole second base. Davison advanced to third on a wild pitch and scored on an error to put the Wolfpack up 3-0.

Hinds answered in the top of the fifth inning scoring two runs off a single deep to center field.

Jordan Antley extended the Wolves lead to 5-2 in the sixth with a stand up double that scored J.T. Wright and Oliver. Twitty scored on an error by the Eagles center fielder to give the Wolves a 6-2.

Hinds scored a run in the top of the seventh inning on a sacrifice fly pulling the Eagles to 6-3.

In the bottom of the seventh, Wright singled to center field. Mordecai reached on an error as both runners advanced to second and third on a wild pitch. Oliver was hit by a pitch to load the bases. Wright extended the Wolfpack lead to 7-3 as he scored on a passed ball.

With two outs in the eighth, the Eagles picked up momentum after Landry Newsom hit a three-run home run deep to left field to pull cut the Co-Lin lead to 7-6. Hinds tied the game two batters later after a fielding error allowed a run to score.

In the top of the ninth, Hinds would take their first lead of the game. Two runs crossed the plate aided by two out Wolfpack errors. Newsom followed with his second home run of the game, a two-run shot to center to put the Eagles lead to 11-7.

Wright led the Wolves in hits with three singles. Davison finished a pair of singles. Antley doubled for two RBIs. Oliver, Taylor, and Twitty (1 RBI) all posted a single apiece.

The Eagles used a staggering seven pitchers in the nine-inning contest. Adam Jackson got the win for Hinds after throwing 5.1 innings. Jackson gave up four runs (three earned), on seven hits, striking out four and walking two.

The Wolfpack would outhit the Eagles 11-to-7, but eight errors would cost Co-Lin the win.

The Eagles scored first in game two, taking a 3-0 lead.

Co-Lin answered with two runs in the bottom of the second inning. With one out, Matthew Mordecai doubled to left field, T.J. Wright followed with a single. Jackson Twitty would single to left field to plate Mordecai. Austin Irby would reach on an error that would score courtesy runner Kewaun May to cut the Hinds lead to 3-2

The Eagles would extend their lead to 4-2 in the top of the third aided by a Co-Lin error.

In the bottom of the fourth, the Wolves took their first lead of the game. With two outs, Twitty was hit by a pitch to start the rally. Justin Oliver singled to left field. Irby followed with a double to left field scoring Twitty. Champ Davison followed with a single to the third baseman that scored Oliver. Irby came around and scored on the throw to the plate, giving the Wolves a 5-4 lead.

Hinds tied the game in the fifth inning after another fielding error by the Wolves. Co-Lin regained the lead in the sixth inning. Twitty led off the inning with a single to left. Pinch runner Kewaun May would advance to second on a wild pitch, reach third on a balk, and score on a wild pitch to give the Wolfpack a 6-5 lead.

The Eagles send the game to extra innings after they tied the game in the seventh with an infield grounder that plated one run.

Hinds took the lead in the top of the eighth with an infield single that scored the go ahead run.

Co-Lin got two runners on base in the bottom of the eighth, but was unable to capitalize.

At the plate, Mordecai would lead the way for the Wolfpack with a double and a single. Davison (1 RBI) and Twitty would add a pair of singles. Irby (RBI) Tyler McLeod, Wright and Oliver would hit safely.

Quinton Logan doubled and singled for an RBI to lead the Eagles. Donte Peters added a pair of singles for an RBI. Chase Cockrell doubled. Adding support with a single apiece were Hunter Bell, Tyley Balch, and Will Craft.

Jordan Antley suffered the loss for Co-Lin giving up three runs (no earned), on four hits, striking out seven in 5.2 innings. Starter J.D. Evans allowed three runs (no earned) on two hits and walked four in 1.1 innings. Miles Thomas (one strikeout, .1 innings) and Ryan Cullop (one strikeout, one walk, one unearned run, one hit, .2 innings) both had brief appearances on the mound for the Wolves.