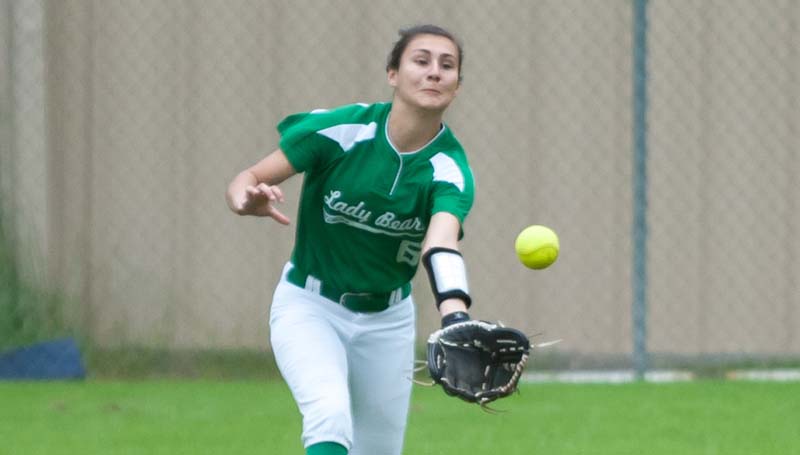 The Lady Bears (11-6, 5-3) will return to action Tuesday when they visit Brookhaven to take on the Lady Panthers. Junior varsity action begins at 5 p.m., followed by the varsity game at 6:30 p.m.

The Lady Bulldogs will also be in action Tuesday when they host the Wesson Lady Cobras for the Region 7-3A championship. Junior varsity action starts at 5 p.m., followed by the varsity contest at 6:15 p.m.

Anna Brook Davis led the game off for the Lady Bears with a triple and later scored the first run of the contest on a passed ball. Franklin County pitcher Emilee Wallace would settle down after that to get out of the inning trailing 1-0.

The Lady Bulldogs tied the game at 1-1 in the second inning. Both pitchers battled in the third, fourth and fifth innings, as the score remained the same.

The Lady Bulldogs loaded the bases in the fifth, but the Lady Bears held strong to get out of the inning unharmed.

A miss-timed throw by the Lady Bulldogs in the sixth inning allowed Makennah Redd to score the second run for the Lady Bears. The Lady Bears loaded the bases in the seventh inning, and scored their final run of the night on a deep fly ball. It was enough to secure the win.

Megan Gerald (6K, 2BB) picked up the win for the Lady Bears. Emilee Wallace (1K, 3BB) suffered the setback for the Lady Bulldogs.

“We did not hit the ball very well today. Our defense did a good job to keep us in the game. Franklin County played well,” said West Lincoln coach Andrew Redd. “We were fortunate to get the win.”

“I am very proud of the girls. Our defense worked hard and was able to keep West Lincoln on their toes,” said Franklin County coach Sally Case. “The girls played hard. Emilee Wallace pitched an outstanding game.”

Jayde Haller directed the Lady Bulldogs with a double, two singles, and a RBI. Chasney Green hit a single and had a RBI. Cheyenne Higgs and Sydney Scott each hit safely with a single.

Madelynn Thornton led West Lincoln with a double and three RBI. Bailey Wilson and Maggie Newman each hit a double and had two RBIs. Jana Case hit a triple and had a RBI. Skylar Hall had two singles and two RBIs. Madison McNatt and Micah Powell each hit a single and a RBI. Morgan Newman had a double and single. Jena Hughes hit two singles. Jona Hughes, Emalyn Langley, and Georgeanna Allen each hit safely with a single.