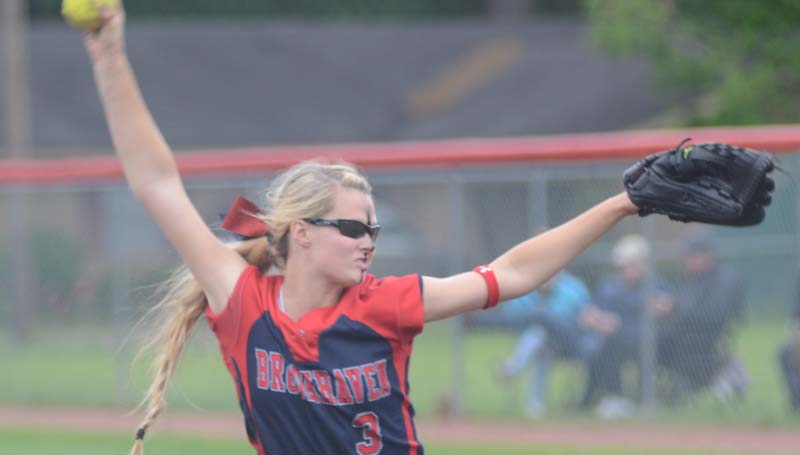 Four homeruns – three in a row – led the Brookhaven Lady Panthers to a 10-8 win over the visiting Bogue Chitto Lady Bobcats Saturday afternoon.

“The game started a little slow offensively for us and really picked up with the three homeruns in a row,” said BHS coach Mandy Vinson. “I was proud of the girls for playing a full seven. Bogue Chitto is a real good team. Our girls kept fighting and played hard.”

Both teams scored runs in the second inning to tie the game at 4-4.

Bogue Chitto plated one run in the sixth to close the gap at 8-5. The Lady Panthers answered in the bottom half of the sixth frame with Shell hitting her second homerun of the game, a two-run bomb over centerfield off a change-up. The score was 10-5 going into the top of the seventh.

The Lady Cats tacked on three more runs in the top of the seventh before succumbing to the Lady Panthers with a final score of 10-8.

“Both teams hit the ball well today,” said BC coach Scott Leggett. “The girls played hard and we were one swing away from tying it up. Christian Black pitched a good game for us. Overall, I was pleased with out effort. Brookhaven has a very good team.”

The Lady Panthers had nine hits during the game. Leading Brookhaven in hits were Katherine Shell with two homeruns, Macy Ziskin with a homerun and two singles and Kat Wallace with a homerun. Hitting safely were Tia Bussey, Madison Thompson and Haley Speaks.

Shell was the winning pitcher with five strikeouts and three walks.

Black suffered the setback on the rubber for BC with six strikeouts and four walks.

The Lady Panthers (17-6, 2-0) will return to action Tuesday when they host the West Lincoln Lady Bears. Junior varsity action begins at 5 p.m., followed by the varsity contest at 6:30 p.m.

The Lady Cats (18-5, 3-0) will resume action Tuesday when they visit Loyd Star to battle the Lady Hornets. Junior varsity action starts at 5 p.m., followed by the varsity game at 6:30 p.m.

In JV action, Brookhaven fell to the Lady Bobcats 8-5.

Leading the Lady Panthers in hitting were Maley Moak and Meg Foster with two singles each. Lydia Butler had a single.