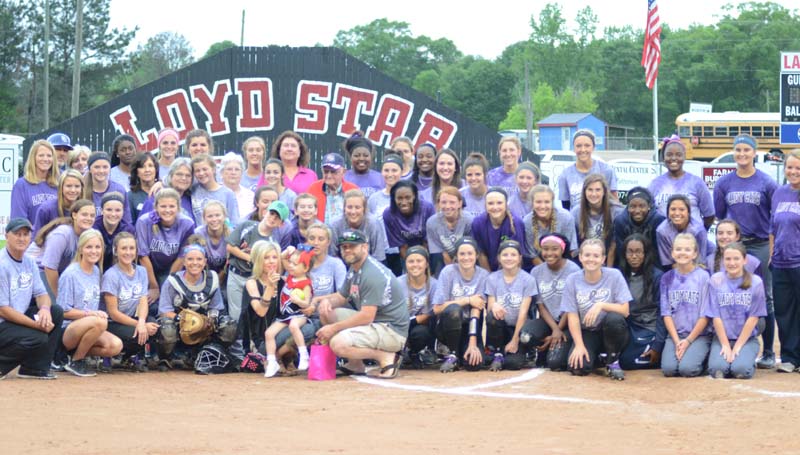 “The girls did a good job hitting the ball when we had runners in scoring position,” said Loyd Star coach Jan Delaughter. Overall, I was pleased with our effort. Bogue Chitto has good team and they are always tough to play.”

The Lady Hornets (17-5, 7-1) will be in action today when they visit Brookhaven to take on the Lady Panthers. Varsity action begins at 5 p.m., followed by the junior varsity game.

The Lady Cats (18-6, 3-0) will return to action Thursday when they host Pearl River Central for Senior Night. Junior varsity action is start at 5 p.m., followed by the varsity contest at 6:15 p.m.

The Lady Hornets quickly set the tone of the contest in the first two innings, scoring five runs to secure an early 5-0 advantage. Megan Norton led the charge with a three-run homer in the second. 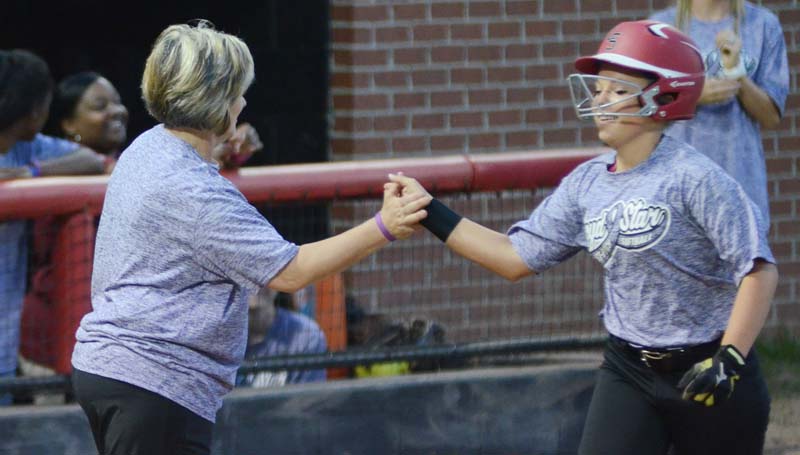 Daily Leader / Marty Albright / Loyd Star’s Megan Norton (right) is congratulated along the third base by her coach Jan Delaughter after hitting a three-run homerun in the second inning against Bogue Chitto.

The Lady Cats quickly rebounded in the top of the third, plating three runs when Zariah Matthews smashed a three-run homer.

In the bottom of the third, Loyd Star plated a run to extend its lead to 6-3. Both teams would score one run each in the fourth inning, before going scoreless through out the rest of the contest.

“Loyd Star did a good job hitting the ball tonight,” said BC coach Scott Leggett. “Codi Leggett pitched a good game for us. We just did not back her up defensively. We made too many errors that hurt us during the game and we cannot do that against a good team like Loyd Star.”

Makenzie Smith was the winning pitcher for the Lady Hornets with six strikeouts and three walks.

Codi Leggett suffered the setback for the Lady Cats with one strikeout and no walks. Christian Black (2K, 0BB) pitched the final two innings in relief.

Norton powered the Lady Hornets with a homerun and a single. Ali Gartman and Abigail Thornton contributed two singles each. Hitting safely were Shelby Smith, Johnna Norman and Julie Smith.

Matthews directed the Lady Cats with a homerun and a single. Codi Leggett, Reagan Kirkland, Baileigh Jackson and Black provided a single each.

Marley Poole (2K, 3BB) and Aly Floyd (1K, 0BB) combined together to collect the win on the mound for the Lady Hornets.

Carly Beth Wallace paced the Lady Hornets with a double and a single. Malori Cade had a single.

The second annual cancer event brought a large crowd to Jan Smith Delaughter Field. Loyd Star and Bogue Chitto recognized those in the crowd who have battled cancer.

A tough, gritty, in-county rivalry was on display when the Brookhaven Lady Panthers took on the West Lincoln Lady Bears... read more