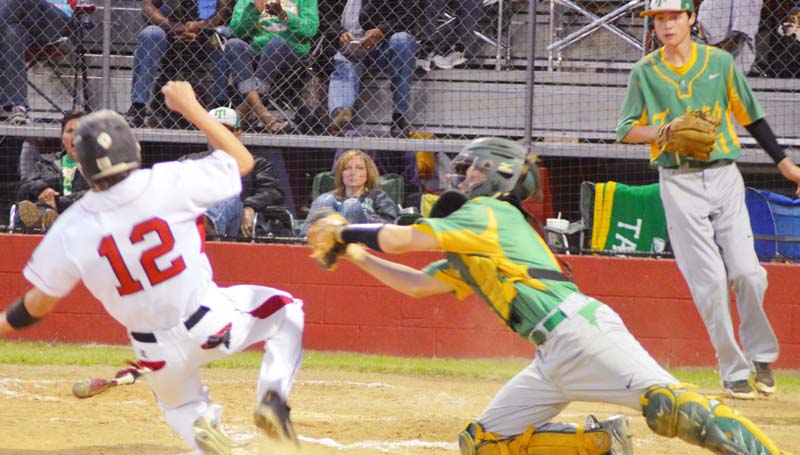 The Taylorsville Tartars defeated the Loyd Star Hornets 10-5 Saturday to even the series and force a deciding game three back at Loyd Star on Monday.

In Friday’s contest, Loyd Star dominated Taylorsville at Smith Field to collect a 11-1 win in the first game.

The Hornets (22-8) will host Taylorsville Monday, starting at 6 p.m., in the third round of the Class 2A playoffs.

The Hornets scored three runs in the first to secure an early 3-0 lead.

Taylorsville answered in the second, plating four runs to take the lead from Loyd Star at 4-3.

In the final five innings, Taylorsville outscored Loyd Star 6-2 to secure the win.

“We did not play our best today,” said Loyd Star coach Jared Britt. “It is hard to win playoff games on the road in the third round when you don’t play your best. We need to bounce back and regroup for game three at home.”

Tucker Boykin was the winning pitcher for the Tartars with seven strikeouts and four walks.

Parker Flowers was the top hitter at the plate for the Hornets with a double. Cade Hodges, Konner Allen, Tucker Watts and Lane Rogers hit safely.

Tucker Boykin paced the Tartars’ offense with a double and a single. Chandler Cline provided three singles. Ashton White, Raven Arrington and Ruffin Myrick had a single each.

Taylorsville scored its only run of the contest in the top of the first inning, before Loyd Star’s offense caught fire to take over the lead at 3-1.

The Hornets continued their offensive onslaught by plating three runs in the second inning, one run in the third inning and three more runs in the fourth, before finishing off the Tartars in the sixth with one run to secure the win.

“I am extremely proud of my guys’ intensity level,” said Britt. “We were able to overcome a rough first inning start and got our bats going to give Cade Hodges a much needed run support.”

Cade Hodges was the winning pitcher for the Hornets with 10 strikeouts and two walks.

Chandler Cline suffered the loss for the Tartars with four strikeouts and three walks in three innings of work. Lane Booth (2K, 2BB) took over in the fourth and pitched the rest of the game in relief.

The Tartars were led at the plate with a single each from Ashton White, Chandler Cline and Kason James.

Daily Leader / Stacy Leake / Bogue Chitto’s Christian Black prepares to make a throw to first base for a... read more