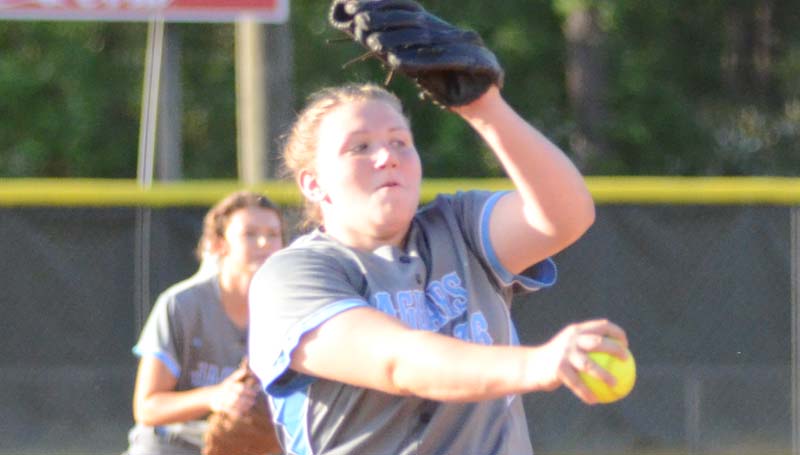 RIDGELAND – North Pike junior pitcher Madison Bigner reached base on three intentional walks, but other hitters in the lineup stepped up as the Lady Jaguars softball team defeated West Lauderdale 10-5 at Freedom Ridge Park in Ridgeland on Friday to secure the 4A State Championship.

North Pike won the series 2-0 and went undefeated in the postseason. While North Pike’s cheerleaders have won three state championships, this was the school’s first-ever title in a team sport.

“We’ve been behind in games before and they’ve managed to come back and win,” North Pike head coach Sonya Wallace said about her team’s come-from-behind win. “They just telling each other, ‘Look, we’ve just got to keep fighting.’ They just stayed with it, got in there and got the job done for us.”

The Lady Jaguars trailed 4-1 after five innings and put together a six-run top of the sixth to take a 7-4 lead. Senior designated hitter Baylee Bryant, who will be playing for Southwest Mississippi Community College next season, capped off the rally with her second home run of the day on a two-run shot. Bryant went 2 for 4 with three RBIs and two runs. Her other homer came in the top of the fifth with the bases empty.

“It couldn’t have ended in a better way,” she said. “I’m so proud of my team and ready to see what next year has in store.”

Bryant had five homers in her high school career, but her only two this season came Friday.

“The pitcher that we saw at South State was very similar to the pitcher we saw today,” she said. “After hitting her yesterday, we were all familiar with her, so that helped a lot.”

“I know she’s excited,” Wallace said. “I’m excited for her. She’s sort of had a season where she struggled sometimes at bat, but she’s also one who would be in the cage after games hitting. I’m just glad to see her come out here and perform like she did today and go out with a big bang.”

Bigner, who homered in North Pike’s 3-1 win in Game 1 of the State Championship series, threw a complete game giving up three earned runs and one walk while recording two strikeouts. She lost her home in the fire just prior to the end of the regular season, but said the way her team pulled together after the tragedy to win the championship feels like a dream.

“I guess everything has been a blessing,” she said. “I knew that this year we had the team to be able to do it and go as far as we can. I just hope that we can come this far next year.”

Freshman Janiah Talbert got the six-run rally going in the sixth with a one-out double. Bigner followed with another intentional walk.

After Bigner’s first two intentional walks, the next hitter junior Jami Spears got out, but this time it was different. Spears connected on a ground-rule double to center field scoring Talbert for the first run of the inning.

“After he put her on the third time, I went to Jami and I said, ‘Look, are you going to let this keep happening? Somebody’s got to step up and make him pay for keep putting her on like that,’ ” Wallace said. “She said, ‘Yes, Ma’am, I’m going to do it right here’ and she got in and ripped a double. You can’t ask anything else from a kid.”

Sophomore Linley Smith’s infield single and a throwing error scored Bigner’s courtesy runner Madison Moak and Spears to tie things up at 4-4. Smith scored on freshman Jenna Brock’s single to give the Lady Jaguars a 5-4 lead.

Bigner was not surprised other hitters came through after she was intentionally walked three times.

“I knew that they weren’t going to be able to win just taking me out of the lineup,” she said. “I knew that we had hitters that were definitely going to score behind me. Baylee also hit two home runs. I think that showed them we don’t have a weak lineup.”

The Lady Jaguars added three more runs in the top of the seventh to extend their lead to 10-4.

Bigner was hit by a pitch during the inning.

Sarah Brock, who will be playing for Jones County Junior College next season, said her team had been behind before and just needed a spark.

“It’s just an amazing feeling,” she said. “I’m speechless right now. I’m so proud of my team and everything we’ve done this season. I can’t even say anything right now.”

Wallace said the seniors were little kids cheering outside the fence when North Pike competed in the state championship in 2009 and 2010. She added they looked up to senior center fielder Hali Sasser in 2009 and senior pitcher and outfielder Kelsey Lord in 2010. She was proud of the way they were able to get the job done Friday.

“It makes all of us super proud looking at the amount of time that they’ve put in, the amount of hard work that they’ve put in going all the way back to January,” North Pike athletic director Kevin Martin said. “Just the countless number of hours that the girls put in, that the coaches put in to get to this point and to come through and win it the way they did, I think that speaks volumes about them as a team and as a coaching staff.”