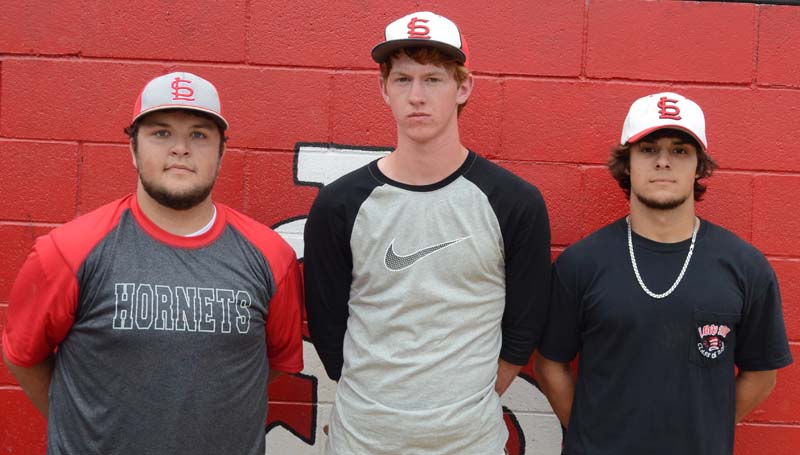 Daily Leader / Marty Albright / Loyd Star’s baseball seniors Lane Rogers, Levi Redd, Lamar Lang and the rest of the Hornets are ready for action as they take on East Union today at Trustmark Park in Pearl.

The Loyd Star Hornets are just two wins away from clinching their first state championship in 36 years.

The Hornets, coached by Jared Britt, will be in action today at 4 p.m., when they take on the East Union Urchins (26-6) in the first game of the best-of-three title series at Trustmark Park in Pearl.

Game two will be played on Friday at 1 p.m., and a third game, if needed, will be Saturday.

“It has been a great year,” Britt said. “I am proud of the guys’ hard work and achievements. It always makes my job a lot funner when we win. I believe we exceeded many people’s expectations. The players and assistant coaches deserve all the credit for all the hard work throughout the season.”

Britt said East Union has a solid pitching staff and a strong defense.

“They have a senior lefty (Witt Roaton) with a 10 wins on the season and a freshman righty (Joel Wilkinson) with seven wins,” he said. “Offensively, they have some good hitters in the one through six slots in their lineup. They have won 26 games on the season so you know they must do a lot of things right.”

Loyd Star returned to practice Monday and worked on fundamentals in a relaxed atmosphere to get ready for East Union.

“I wanted my guys to practice relaxed and loose, while refreshing their fundamentals and the small things, while maintaining the same until routine,” said Britt.

The Hornets’ reserves are Cole Smith at catcher, Dane Smith at shortstop/pinch runner and Dawson Zumbro at second base.