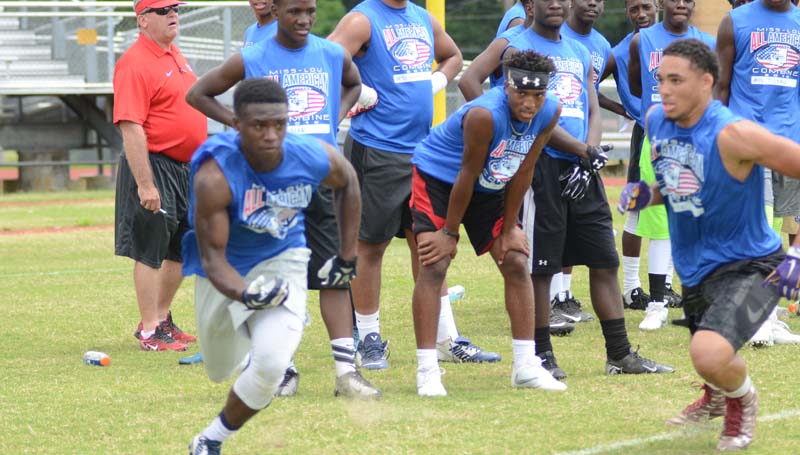 Brookhaven High defensive back Jemaurian Jones made a name for himself Thursday in the Miss-Lou All-American Combine sponsored by KDMC Performance at King Field.

Every receiver was challenged by Jones and despite the bragging, he backed it up.

The 6-2, 175-pound Jones took on all comers as he proclaimed himself ‘The No. 1 Cornerback in the Miss-Lou’ as he drew a crowd of spectators and coaches each time he faced a wide out.

“I just went out here and fun today,” said Jones.

Despite temps near 90 degrees, the combine featured some of the area’s best and players from as far as Breaux Bridge, Louisiana.

“It was some competition out there today,” said Franklin County rising senior De’Martre Collins. “Everybody that came here was hungry.”

Collins showcased his speed by running a 4.37 in the 40-yard dash and catching pass after pass in drills; he even called out Jones towards the end of the combine for a one-on-one showdown that he swiftly won by making a running catch as Jones grasped to keep up.

“Great friendly competition,” said Collins about the one-on-one battle with Jones afterwards. “He (Jones) kept everybody in check but me.”

With satellite camps headlining the busy summer evaluation period, the Miss-Lou Combine kicked things off in a quick way. Six players ran a 4.5 or under in the 40-yard dash, and two ran sub 4.4.

Wesson rising junior Dell Thigpen won the fastest man competition by outrunning the Top Five fastest at the combine. Thigpen, a cat-quick slot back, also ran a 4.37 at the combine to tie Collins for the top mark.

The big draw Thursday was Ferriday High’s Dare Rosenthal, who’s currently rated one of the top players in the 2018 Class nationally. The 6-8 defensive tackle tipped the scales at 313 pounds then blew everyone’s mind with a 4.89 in the 40-yard dash. With offers from the likes of Alabama, LSU, Ole Miss, Texas, Florida and Florida State, Rosenthal remains open in his recruitment after de-committing from Alabama back in April. 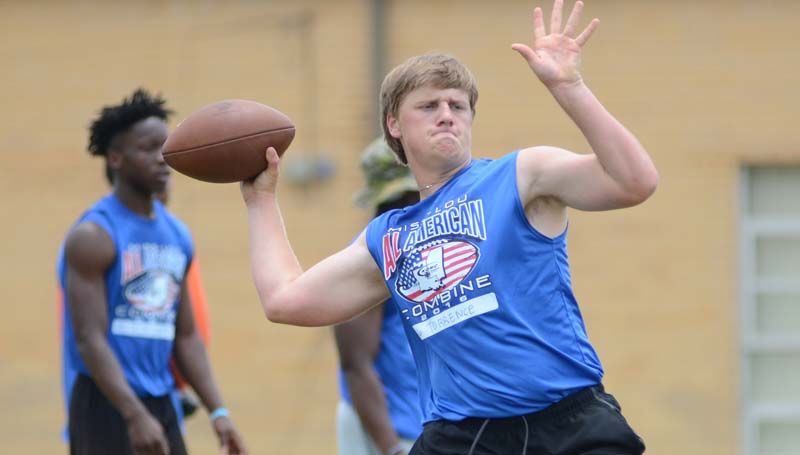 “Right now I’m just focusing on getting more offers,” said a soft-spoken Rosenthal. “I have no favorite right now.”

Rosenthal, who has offers as both an offensive tackle and defensive linemen, also showcased his catching skills in one-on-one drills as he made a spectacular one-handed grab while running a slant.

Copiah Academy quarterback Dylan Torrence also made some impressive throws during one-on-one drills. Torrence transferred to Copiah from Jackson Prep in the spring and will be one of the top passers in the area this year.

“It wasn’t our largest group, but it was one of the best skill position groups we’ve had at this one,” said Robertson. “Nine players with Division 1 offers participated, and by the looks of it a few more will get offers this summer.”

Breaux Bridge rising senior safety Tylar Wiltz is one of the prospects that impressed coaches and scouts in attendance. The 6-0, 182-pounder came into the combine with Division 2 college offers, but he may have left it on the verge of some Division 1 college looks.

“One of the reasons I came up here was to get my name out more,” said Wiltz. “I can play on the Division 1 level, I just know I can.”

The combine lasted nearly four hours, and was concluded with a speech from Robertson about never giving up and continuing to play and work your hardest.

“A few years ago we had a guy here named Leo Lewis that came to this combine no one knew about and then he got offers from the likes of Alabama, LSU, and Ole Miss before signing with Mississippi State. Last year Kentwood’s Shyheim Carter (Alabama), with offers from every school in the nation came here and ran a 4.39 and took part in every drill. Kids like these that no one knows about and that everyone knows about enjoy the competition at the end of the day,” he said. 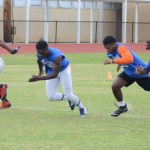 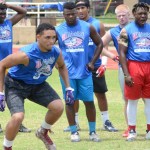 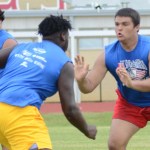 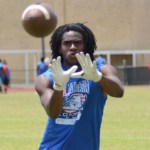 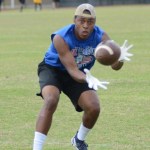