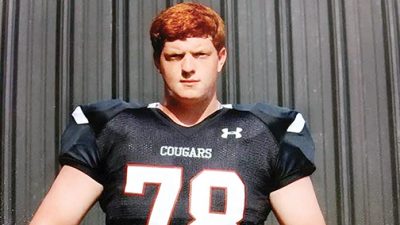 Oliver Moreman shut his recruiting down early on when he made a pledge to Mississippi Gulf Coast Community College. On Wednesday Moreman followed through on that commitment by signing a letter-of-intent with the Bulldogs.

Moreman had made a connection with MGCCC by attending their lineman camp. As a senior Moreman played left tackle on a Lawrence County offensive line that paved the way for 3.353 rushing yards and 36 touchdowns via the ground in 2018. He also played in a part-time roll on the defensive line. However, he’ll be making a complete position change when he heads to Perkinston.

“The coaches at Gulf Coast told me they loved my work ethic, how hard I played, and that they knew they wanted me on their team,” said Moreman. “They weren’t sure what position I would play though. I’m not fast enough as a defensive lineman to play there and their offensive line is huge.”

The answer of where to plug Moreman in at came in the position of H-back. For the uninitiated, an H-back is used similar to a tight end. The position plays a “set back” position on the line and is used like an extra tight end. Former Washington Redskin head coach Joe Gibbs is lauded as an innovator of using the position.

“I’ve been trying to gain weight since I’ve been in high school,” said Moreman. “I’ve just never been able to pack on the pounds like some people can. I’m excited about getting to play a new position that’s important in their offense.”

Gulf Coast — under the direction of first year head coach Jack Wright — finished 7-2 in 2018. Gulf Coast is a program that uses the H-back in their formations more than any team in the MACJC and have done so since Steve Campbell revived the program beginning in 2004.

“I just felt like the coaches at Gulf Coast have been loyal to me and it felt like home,” said Moreman. “That’s what I knew I was going to base my decision on, finding a place that feels like home.”

Moreman is 6-foot-2 and weighs 240-pounds. His new coaches don’t want him to lose any weight, just to tone up and become stronger as he prepares to enroll at MGCCC. He plans on majoring in criminal justice and think he may room with running back Deondre House, a Senatobia High signee that plans to have the same major.

“I’ve always loved to block and I’m going to still get to do that, just from a different position on the field,” said Moreman. “I’m going to do everything I can to get better and help my new team.”