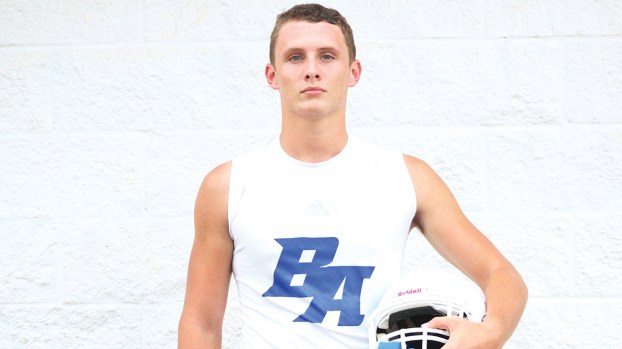 Photo by Cliff Furr Brookhaven Academy junior Gage Brown made 12 tackles, one sack, a forced fumble and a fumble recovery for the Cougars in Friday night’s victory over Centreville Academy.

Last basketball season during the Brookhaven Academy Cougar’s run to the MAIS AA state title, assistant football coach Jaymie Palmer pointed towards the bench during a game in John R. Gray gymnasium and said this:

“Those will be our two defensive ends next season, Gage Brown and Trey Fortenberry. They’ll both be juniors and are only going to get bigger. That’s two really nice sized kids playing on the edge in our league.”

Saturday night, facing a grind-it out Centreville Academy rushing game, the Cougar defense played strong in a 24-20 win. Brown finished the game with 12 tackles, a sack, a forced fumble and a fumble recovery. For his play he has been named The Daily Leader Defensive Player of the Week.

Coming off a game in which they gave up 44 points in a loss to Columbia Academy on their home field, the Cougar defense knew they needed better execution to stop Centreville on the road.

“I knew I’d be in the middle of the action all night,” said the 6-foot-2, 190-pound Brown. “That’s what I like the most about playing defensive end, when they run towards your side and you get more chances to make tackles.”

Brown made the most of those chances. On the fumble he forced he wrapped his arms around those of the Centreville ball carrier and ripped downward to jar the ball loose.

On his fumble recovery he saw the ball on the ground and dove on to beat out the CA players trying to recover it.

Brown will occasionally see action as a backup tight end, but he’s focused mostly on playing defensive end. He was a backup D-end last season and worked hard in the offseason to improve prior to this season.

“I really enjoy lifting weights,” said Brown. “I’m stronger in my upper body and that’s helped me in being able to shed blocks. Our coaches have done a lot of teaching to improve my techniques on ripping through to get free.”

The 3-1 Cougars only have three seniors on their roster. Many of their starters gained experience last season as backup, but now have bigger roles within the team. Winning on the road in a game that they were trailing late against a big rival feels like a big step forward for the team’s growth.

“When they scored in the fourth quarter you didn’t see guys hanging their heads on our sideline,” said Brown. “We knew we were going to go down and score to win it.”

BA gets into district play on Friday when they host Cathedral. The Cougar defensive line will again have a big outcome on the game.

“How our line plays against their run will be a big factor in who wins the game,” said BA coach Ron Rushing. “They’ve got a good running back and a couple of experience offensive lineman up front. We’ll need guys like Gage, Trey, Trenton Tarver, Cade Watson and Nick Ogden to really get to the ball fast on Friday night.”

Wolves travel to face the Rangers

The No. 8 Copiah-Lincoln Community College Wolves are on the road for the second straight week as the 3-0 squad... read more