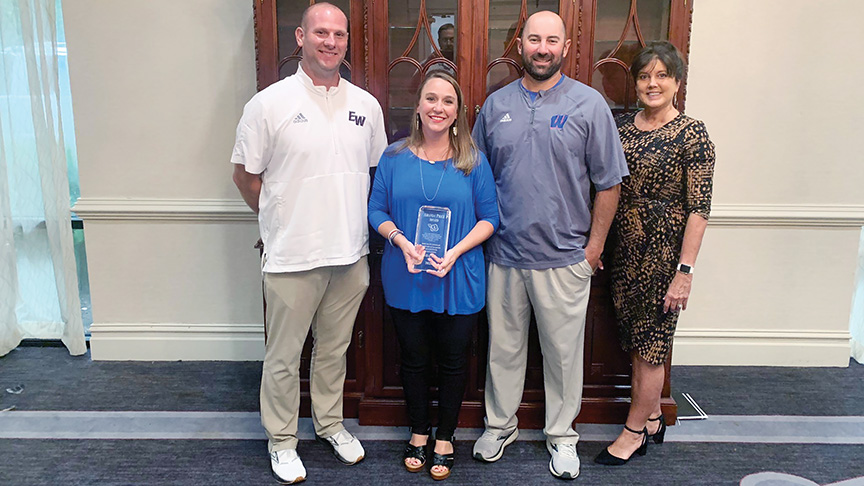 The Mississippi Association of Coaches (MAC) holds its annual convention in Jackson each summer just before students and teachers return back to school.

The convention draws coaches from all over the state who listen to other coaches give instructions and tips in clinic settings and it’s also a time for awards to be handed out to those who won state titles the previous year.

One of the newer awards of the weekend is presented at a brunch hosted by the Mississippi Coaches’ Wives Association each year. Since 2012 the MCWA has presented the Amanda Price Award to an outstanding coach’s wife at the brunch.

Last week the 2021 Amanda Price Award was given to Sarah Loy of Wesson, wife of head football coach Jeremy Loy.

Jeremy has long been involved with the MAC and Sarah has been a part of the MCWA since near inception. Coaches nominate their wives for the award every year and Sarah had no idea that Jeremy had submitted her for consideration until she got the call that she’d won.

“I go to the brunch every year, but they called to confirm I would be there because I was the recipient this time,” said Sarah. “I just wanted to read what Jeremy had sent in and he let me read the very sweet email he submitted to nominate me. I was truly honored.”

The award is presented each year by Ron Price. Price is currently the head football coach at East Webster High School, but previously he was the head coach at New Albany.

That’s where Ron Price was coaching when Amanda Price tragically lost her life after taking the family dog out into the backyard around 10 p.m. on Dec. 5, 2011.

Craig Baker had been burglarizing cars in the area and Amanda Price walked up on him in her family’s backyard.

Baker shot and killed Amanda Price and then shot Ron Price in the shoulder as he rushed outside to help his wife.

In 2013 Baker pleaded guilty to murder and was sentenced to life in prison.

Sarah didn’t know Amanda Price, but feels like she had a good sense of who she was after seeing and hearing Ron Price at the MCWA brunch every year.

“Every year they talk about what a great mother she was, that she loved her husband, she loved his players and that she loved the Lord,” said Sarah. “Every summer her daughter Molly Addison has come with her dad to present the award and you feel like you’ve watched her grow up in a sense from one year to the next. Ron has remarried and now he brings his entire family to the brunch and it’s always a really sweet, special time.”

Jeremy and Sarah both grew up in Natchez and started dating when Sarah was a senior at Adams County Christian School. Jeremy was older and had played quarterback at rival Trinity Episcopal.

They dated while attending Mississippi State University and Jeremy’s first coaching job was back at Trinity.

From there the Loys moved around the state as Jeremy worked for different coaches while Sarah served as a teacher herself.

From there he went to Mendenhall and then to Brookhaven High where he was hired as an offensive coordinator for then coach Tommy Clopton. The upcoming season will be his sixth at Wesson since being hired as the head coach there in 2016.

The Loy’s oldest child Will is the starting quarterback at Wesson and is a junior in 2021. Their youngest two, Macy and Wesley, are both in junior high at the school.

Married for 19 years, Sarah reflects now on those moves when her family was young and growing and sees divine providence in the decisions made by her and Jeremy.

“The Lord guided us,” said Sarah. “We can look back now and see how His hand was in every single move and every single place that Jeremy worked and who he was working for.”

Showing up and being present has always been important for Sarah in order to support Jeremy’s teams, even when it wasn’t easy to go to games with young children.

“When our youngest Wesley was little, I think people thought he couldn’t walk because I kept him locked up in his stroller,” said Sarah with a laugh. “Being supportive and going to every game I can has always been important to me and the only way I could make it through a Friday night with a toddler was to keep him in a contained area beside me. That’s my advice to anyone who has a spouse starting out in coaching — be all in and go watch their team play whenever possible.”

Now instead of corralling the kids in the bleachers, she gets to watch them play on the field for their dad.

“With Will being a junior and playing with these kids that he’s grown up with and that I’ve taught, it just brings you even closer with the team,” said Sarah. “It feels like it’s going by too quickly.”

Jeremy has always felt called to coach, but part of what has made answering that call so easy over the last 20 years is having a teammate like Sarah that also feels like she’ been called to be beside him.

“She’ll let me know when I’m being too much coach and not enough daddy at home,” said Jeremy. “She’s always been my best teammate and I was proud to see her get that recognition.”